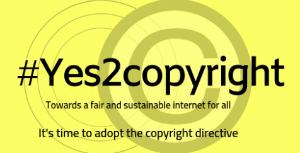 Last month the European Parliament and Council agreed on the final text of the EU Copyright Directive.

This includes the controversial Article 13 and Article 11, which opponents condemn as “upload filters” and “link tax” proposals respectively.

Many organizations in the creative and publishing sectors are of a different opinion. They see the copyright reform plans as a much-needed step in the right direction of an Internet that treats creators more fairly.

With the final vote just two weeks away, a massive coalition of 243 organizations representing a wide variety of rightsholders is calling on the European Parliament to adopt the plans.

“We, the undersigned organisations, representing authors, composers, writers, journalists, performers and others working in all artistic fields, news agencies, book, press, scientific and music publishers, audiovisual and independent music producers call on the European Parliament to adopt the Directive on Copyright in the Digital Single Market,” the letter reads.

The full list of supporters includes popular names such as Thomson Reuters, The Independent, the Association of Independent Music, Getty Images, PRS for Music, SACEM, Eurocinema, and many, many others.

The different groups have a shared goal of better copyright protection but some elements of the Copyright Directive may apply more to some than others.

The music groups, for example, are likely to be the most focused on Article 13. This requires for-profit Internet platforms to license content from copyright holders or, if that is not possible, ensure that infringing content is taken down and not re-uploaded to their services.

For their part, news publishers will be more interested in Article 11. This allows these organizations to charge Internet platforms, such as Google, Facebook, and Twitter, for displaying snippets of their content to the public at large.

The joint letter the groups released this week mentions neither article, only the Copyright Directive in general. However, they make it very clear that the proposed changes are needed to create a fair and sustainable Internet.

“This Directive has been long sought to create a much-needed level playing field for all actors of the creative sector in the European Digital Single Market, whilst giving citizens better access to a wider array of content,” the letter reads.

“This is an historic opportunity. We need an internet that is fair and sustainable for all. This is why we urge policymakers to adopt the Directive quickly, as agreed in trilogue negotiations,” it adds.

The sheer number of organizations show that there is broad support for the Copyright Directive in the creative community.

But there is plenty of opposition as well. Earlier today we mentioned that the UN’s Special Rapporteur on freedom of opinion and expression has raised the alarm over Article 13 and its de facto filtering requirements.

In the days to come, we will likely see more calls for support while protests look set to escalate.

A copy of the letter including the full list of signatories is available below.