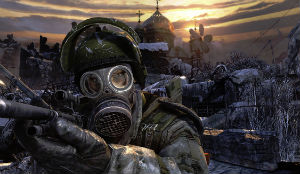 Not to sound ageist, but generally speaking 86-year-old women are not that interested in zombie games like Metro 2033.

This also applies to Christine McMillan from Ontario, Canada. In fact, she’d never even heard of the game until an anti-piracy group accused her of pirating a copy via BitTorrent.

McMillan is one of the hundreds of thousands of people who’ve been accused of copyright infringement under Canada’s “notice and notice” regime.

Due to a change to Canada’s copyright law early last year, ISPs are now required to forward copyright infringement notices to their customers. As a result, tens of thousands of Internet subscribers have received warnings in their mailboxes, with some asking for cash settlements.

The 86-year-old woman falls in the latter category. In the letter received from anti-piracy group Canipre, she’s threatened with thousands of dollars in damages, if she doesn’t comply.

“They didn’t tell me how much I owed, they only told me that if I didn’t comply, I would be liable for a fine of up to $5,000 and I could pay immediately by entering my credit card number,” McMillan told Go Public.

At first, McMillan thought she was dealing with spammers but Cogeco, her Internet provider, confirmed that the email with the settlement offer was legitimate.

The power of the settlement scheme lies in the uncertainty people face. Most recipients are unaware of the notice-and-notice system and fear that a lawsuit is looming. However, thus far not a single lawsuit has followed in these cases.

They are basically regular takedown notices, bundled with a settlement request, which are common in the U.S. as well. The rightsholders have no idea who the accused are and have no way to contact them directly.

McMillan is obviously not happy with the notice-and-notice legislation which she brands as “foolish.”

“That somebody can threaten you over the internet … that to me is intimidation and I can’t believe the government would support such action,” she says.

Canipre’s owner Barry Logan, however, doesn’t see anything wrong with the practice and says that his company is helping its clients to educate the public on piracy and theft. The threatening language in the letters doesn’t cross any lines, he notes.

For the anti-piracy group the new legislation has been a great success. By sending out tens, or hundreds of thousands of warning letters, they’ve collected about $500,000 in settlements since it was put in place last year.

This also means that Canadian Internet subscribers are half a million lighter as a result.

Interestingly, McMillan is not one of them. While she made herself known by going to the press, she has no intention of paying up for pirating a zombie game she’d never even heard of.