Five years ago, Popcorn Time was widely embraced by pirates, thanks to its ability to stream torrent files through a user-friendly interface.

This rapid rise raised concern among many movie industry companies, who worked hard to contain the threat by going after several forks and their developers.

This resulted in the shutdown of several projects. Those that remained online were targeted by website blockades in several countries, including the UK and Denmark.

Popcorn-Time.no was also targeted in this crackdown. The Economic Crimes unit (Økokrim) of Norway’s police seized the domain name after it was branded an illegal site by rightsholders.

This was highly unusual because the domain in question didn’t host the Popcorn Time software. Instead, the site posted news articles, as well as links to sites that offered the application.

In most cases, this issue would have blown over, as the site had a relatively small number of users. However, in Norway, this wasn’t the case. Electronic Frontier Norway (EFN) and the Norwegian Unix User Group (NUUG) took an interest in the case and went to court.

This was “revenge of the nerds,” as the groups’ lawyer previously put it. They felt that taking down a domain name without proper judicial review went a step too far.

After several rounds in court, the registrar IMCASREG8 (IMC) got involved, as it would lose its rights to the popcorn-time.no domain. IMC chose to contest this claim to hold the authorities accountable and was joined by EFN and NUUG.

The owner of the original domain is not involved and was never charged. Instead, EFN, NUUG, and IMC hope to protect their rights in the bigger picture.

NUUG is standing up to defend multi-use Open Source Technology, for example, while IMC hopes to prevent the commercial chilling effect these broad domain seizures may have.

Last week they presented their arguments in court where EFN argued that the seized the Popcorn-time.no site was merely exercising its right to free speech.

To do so, the group published a book titled “En ulovlig bok?” which translates to “An Illegal book?” The paperback version, for sale here, is a printout of the site on paper. 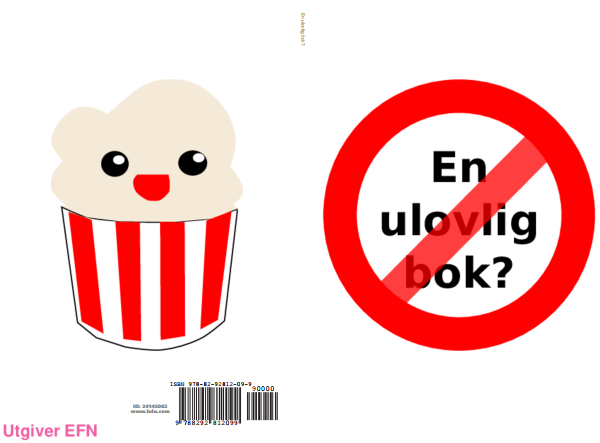 If Popcorn-Time.no was illegal, then this book would be too, EFN argued in court.

“The goal is to put the focus on whether freedom of expression is protected
on the Internet. For EFN it is critical that expressions on the Internet should be no less protected than expressions in a book,” EFN’s managing director Tom Fredrik Blenning tells TorrentFreak.

“EFN is thus of the opinion that there are only two possible options. Ban
the book or allow the website. Of course, the latter is the only one which makes sense.”

A page from the book 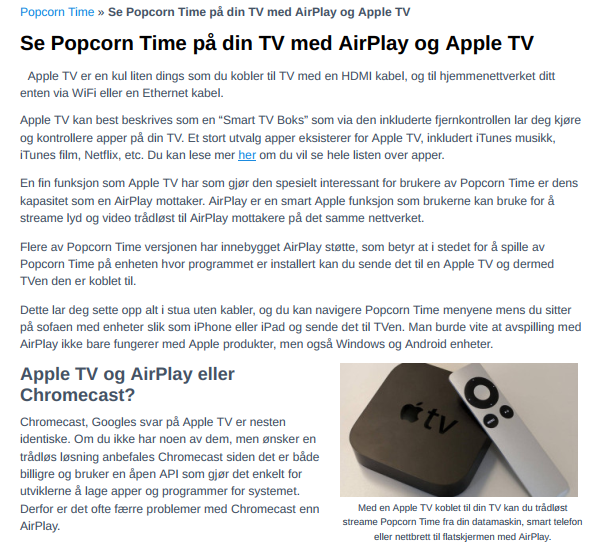 While the contents of the site and the book are the same, the paper version has no hyperlinks of course. Whether that makes a difference has yet to be seen.

The rights group also presented witnesses to substantiate their claims and to counter the opposition. Among other things, it was argued that there is more legal content available (~5%) on Popcorn Time than the prosecution claimed (<1%), although most of it is infringing.

It was also stressed that Popcorn-time.no made no infringing content available. There is no direct link between the alleged pirates and the site.  It only pointed to sites where the application could be downloaded, something Wikipedia does as well.

The prosecution, on the other hand, argued that such a link isn’t necessary. It clearly brands Popcorn-time.no as an infringing site which harms copyright holders, and it believed that the seizure was justified.

It’s worth mentioning that the Popcorn Time information site looked rather similar to a Danish version, of which the owner received a conditional prison sentence last year. In Norway, there was never a named suspect, however.

It is now up to the court to decide the matter. The verdict is expected to come in later this month. For now, “An Illegal Book?” is still up for sale.