When we first reported on Coda.fm we praised the site for its great design and functionality. It has a full-blown recommendation engine that makes it a great tool to discover new music and its ease of use is superior to that of most industry sanctioned ‘legal’ alternatives.

On the album download pages Coda.fm has a short bio of the artist, the album’s track list, recommended albums, but also a link to buy the album on Amazon. Contrary to the “pirates of the Amazon” firefox plugin we covered previously, users are encouraged to buy the music instead of downloading it – not the other way around.

“We give the user the option to easily buy an album that they liked after downloading and hearing it for free,” the Coda.fm founder told TorrentFreak. He thought it was a good idea, and it therefore came as a surprise when Amazon asked him to remove the links from the site. In addition, the world’s largest online retailer closed his associate account.

“I can’t overstate enough the idiocy of said request: they’re actually telling us to stop helping them selling albums,” the Coda.fm said venting his frustration. Indeed, in theory this is a win-win situation for all parties involved. Amazon, the artists, labels and the Coda founder all made extra money while the users of the site could buy off their guilt. 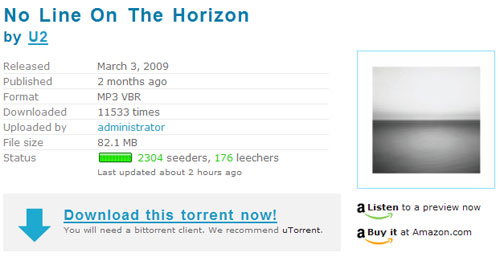 So why did Amazon request the links to be removed then? Most likely they don’t want to be affiliated with a BitTorrent site because that might hurt their image. The Amazon links are still on Coda.fm though, and the founder of the site has no intention of removing them anytime soon.

“Although we’re no longer an Amazon Associate, we’re going to keep the links to buy the albums. A couple of hundred albums and digital downloads have been sold to date, proving it’s usefulness, and that is the only criteria we use to decide what features we keep or remove,” TorrentFreak was told.

The fact that already hundreds of albums were sold through Coda.fm shows that ‘pirates’ are willing to pay for music. It’s time for the music industry to find out how to get them on board.