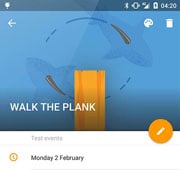 Today Calendar Pro is a popular replacement calendar for Android. Several thousand voters on Google Play agree on its quality, most voting near to the fabled five stars.

However, at the start of February developer Jack Underwood announced that rather than pay for his software, a huge majority are preferring to pirate it instead. The figures were substantial. According to the UK-based dev, 85% of ‘pro’ users were using his software without paying for it.

While that fact might’ve caused some creators to go nuclear, Underwood remained pragmatic. He engaged his public and decided to make light of the situation by introducing some novel anti-piracy measures in his software. Rather than make it unusable, Underwood added some pirate-themed events as detailed in our earlier article.

It turned out to be a great move on the PR front. News of Underwood’s approach spread quickly and dozens of news outlets covered the story giving the developer and his software plenty of exposure. Interested in the effects of this new-found fame, TF caught up with the dev to assess his mood.

As it turns out Underwood was in fine form. News of massive piracy of his app published February 2nd/3rd onwards had certainly turned into a positive. Sales of his software enjoyed a significant boost, as the graph below illustrates.

While reluctant to talk about money generated, Underwood did reveal the size of the increase over regular sales. Today Calender Pro sold around three times more than it usually does after the news broke, leveling to twice as many sales shortly after.

However, it was the effect on Google Play’s rankings that appears to have done Underwood the biggest favor. Following news of the high piracy rates there was a five-fold increase in Play user ratings, averaging a score of 4.8. This means that Today Calendar Pro is now the highest rated calendar on the Play store.

The ratings boost means that sales are now running at a steady 50% uplift, a great result all considered.

Interestingly, however, the free version of the app hasn’t done quite so well. On the first day sales increased two-fold, dropping to 1.5x the day after. Unlike the ‘Pro’ version, there was no change in Play ratings and ‘sales’ are now back to the level they were before.

But perhaps of most interest is how these new figures have affected piracy rates overall, which previously sat at 85%.

“Over the last week pirated installs have made up 56% of the downloads,” Underwood informs TF. “Much better, but I guess we’ll see how long it lasts!”

Finally, Underwood says that interest in the pirate-themed events he added to his software has resulted in lots of requests from users wanting to see them. He’s come up with the following solution.

“Users can now trigger the pirate events themselves. Any event title with ‘walk the plank’ or ‘swashbuckling’ or ‘pirate’ (providing there’s no other trigger words) will cause the pirate images to be displayed,” he concludes.