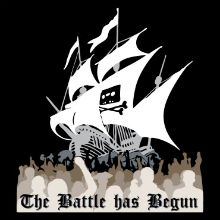 Starting mid-September, dozens of anti-piracy groups, copyright lawyers and pro-copyright outfits have been targeted by a group of Anonymous Internet ‘vigilantes’ under the flag of Operation Payback.

The operation started initially as ‘payback’ against outfits that tried to stop the BitTorrent site The Pirate Bay, and DDoS attacks were organized to strike back. A few days ago, the operation changed course and instead began to go after organizations that displayed opposition towards Wikileaks.

Over the last days several high profile companies and institutions were taken offline temporarily by DDoS attacks including Mastercard, Visa and Paypal. Conversely, Operation Payback’s operation was also obstructed with the deletion of their Twitter and Facebook accounts after the news hit the mainstream media.

Yesterday, this was followed by the arrest (Dutch) of an alleged ‘member’ of Operation Payback in The Netherlands. The local police announced that a 16 year old boy was arrested, suspected of being involved in the DDoS attacks on Wikileaks related targets.

The boy, whose identity was not released, will be heard in court today and has reportedly confessed to his involvement.

According to several sources the arrestee is known online under the nickname Jeroenz0r. The authorities have not yet confirmed this, but the person using this nickname has been ‘missing’ online for the past 24 hours, and has been involved with Operation Payback for quite a while. Jeroenz0r was also an IRC operator at thefailship.net, where one of the former IRC channels of Operation Payback was hosted.

“Jeroenz0r and his server became delinked Thursday night at around midnight UTC time,” a source told TorrentFreak, confirming that the teenager lives in The Hague, where the arrest was made.

“Some of his friends tried calling him yesterday but the phone lead to voicemail. When calling his home number, his dad refused to comment on the situation. Furthermore, his local town newspaper also reported that a local 16 year old boy was arrested.”

Another source, who acts as an Operation Payback spokesman, confirmed that Jeroenz0r has been unreachable since the time of the arrest.

How the police became aware of Jeroenz0r is unknown, but we were told that he didn’t cover his tracks too well.

“Others on the network who know him a bit better knew that he was sloppy and often left traces from his actions online. Also, the Google results on him are quite impressive and indicate that he has been quite active in the torrent scene.”

In a possible response to the arrest, the Dutch Prosecution Office now seems to be under a DDoS attack. Previously the Dutch police stated that they will not go after people who ‘make their computers available” for these attacks, but that they will target people who are more heavily involved.

The remarkably swift arrest of Jeroenz0r, a 16 year old Dutch student, has been all over the international media since the event took place. While the Kremlin takes a dig at the U.S. over Assange’s arrest, while Facebook and Twitter delete the accounts of cyber activists, while over 9,000 ‘hacktivists’ are believed to be behind electronic onslaught, the Dutch authorities arrest a 16-year-old boy
suspected of involvement with Operation Payback.

The whole world reports about WikiLeaks and Operation Payback. How could an underage boy be held responsible for making the world wide news? How could the Dutch authorities hold a 16 year old boy responsible for the world being in a state of digital war?

Is it in the haste of getting something done, that the Dutch government labeled him as a scapegoat and a terrorist, just so they could say: “We have done our part about the cyber terrorists”? Is the detention and possible conviction of Jeroenz0r an act by law,
or is it –as we suspect– a political statement? Is Jeroenz0r being used to scare the
hell out of everybody who would think that they could do something about censorship and the forces our governments (ab)use?

If this would be a fair trial, what evidence would there be? He may have been a user, or even host for an IRC server, still, this may hopefully not be the primary reason? Even if he had an active role in coordinating the attacks on MasterCard and Visa, which is still improbable, Anonymous is not a personal army and will not be commanded like one. How then, would that incriminate him if everybody is responsible for his/her own deeds? One student would never be powerful enough to take down corporations like MasterCard, Visa or Paypal.

Could we accept that in todays’ society, big corporations are using children as a means of manipulating people for their own gain and benefit? What could have happened if the government had decided to stick out for freedom of expression and free speech, and refused to bend under the demands of MasterCard and Visa? It could have turned out to be a turning point in the war between big corporations and the people who get caught in the gears of the system and have no means of making their way out from the mess.

Eventually, even the government will have to decide, either to be the puppet in the hands of global corporations, or be the one who paved way for rebellion against oppressive corporations and corruption of our society.

We would like Jeroenz0r to know that Anonymous will not be giving up on him. One for all, all for one. Divided by zero.