The adult entertainment industry is waging a war against supposed copyright infringers in the U.S. courts, suing tens of thousands of individuals and several businesses. By now the cases against alleged BitTorrent downloaders are well-publicized, but the copyright holders also employ different tactics to obtain the personal details of alleged infringers.

One of these cases centers around the UK-based company GLBT, which operates various adult streaming websites. The company is involved in a lawsuit against several adult entertainment studios, who are demanding that GLBT identifies the personal details of all its members.

GLBT are refusing to do so because of the privacy issues involved. They consulted with a UK lawyer who explained to the court that the Data Protection Act prohibits the company from giving up any personal information absent of a European court order.

The company further pointed out to the judge that the copyright holders may intend to use the personal info of their users to start lawsuits against them. By doing so, the defendants referred to a recent TorrentFreak article where we showed how an adult company sues people for downloading ‘mislabeled’ files.

Excerpt from the court filing 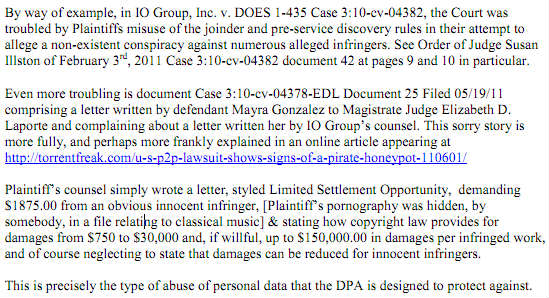 One of the lawyers we contacted for the article was Gill Sperlein, who is also one of the attorneys on record in the above case. As is proper, we contacted Gill Sperlein before publishing the original story, and included his comments for the necessary balance.

During our email conversation Sperlein was kind and responsive, and even after publishing we heard no negative comments. However, in his comment to the court the lawyer and one of his colleagues are suddenly claiming that we fabricated the entire story, and that the court should ignore everything we write.

Below is the quote from the anti-piracy lawyers in question, emphasis added:

“Defense Counsel in a manner unbefitting a member of the bar, attacks Plaintiff’s Counsel by referencing an article appearing on torrent freak – a blog dedicated to online piracy. The article sets forth a myriad of lies and unsubstantiated accusations that Mr. Capp presumably is unwilling to make himself. Nonetheless, Mr. Capp introduces the highly prejudicial and completely non-probative statements in an attempt to discredit Plaintiff’s counsel.”

But wait a second… Who’s discrediting who here?

Those who read the original article will notice that we’ve been very careful with our wording and that we’re certainly not publishing lies. If anyone is making unsubstantiated accusations then it’s Gill Sperlein himself. He could have at least given one example of the myriad of lies. Or perhaps there aren’t any?

We may not always agree with the practices of these anti-piracy lawyers, but we’re not stupid. The last thing we want is being dragged into a defamation lawsuit so we pick our words carefully. Perhaps Mr. Sperlein should consider doing the same.

Let’s hope the judge in question sees through these unsubstantiated accusations. If GLBT is indeed ordered to hand over all user details we could be in for one of the worst privacy disasters in recent history, and yet another avalanche of lawsuits.