Anti-Piracy Outfit Pirates Article and Images For Own Press Release

Back in December authorities in South Africa made their first ever arrest of an online movie pirate. The individual, who was connected to a leak of a high-profile local movie on The Pirate Bay, quickly became the focus of the country’s main movie-related anti-piracy group.

The Southern African Federation Against Copyright Theft (SAFACT) clearly appreciated the significance of the development, with their CEO Corné Guldenpfennig explaining they had caught the man by employing a hacker. The group further clarified via a piece on their own website.

“The senior investigator on the E-Task Team is an internationally accredited CEH, or certified ethical hacker. This team was able to identify, profile, and trace the uploader based on their investigation on the Internet,” SAFACT wrote, adding:

“When asked about the significance of the case, Guldenpfennig said that it is a first for South Africa and that they made extremely certain of all the rights issues around this situation.”

Unfortunately, making sure “of all the rights issues” wasn’t something carried out by SAFACT in respect of their own website. Let’s take a look at an excerpt from the SAFACT announcement currently displayed on their site, with the focus on the last few lines.

Funnily enough, it turns out that the much of the SAFACT article, minus a few alterations that would identify the source, was lifted from an article written by Jan Vermeulen for MyBroadband.co.nz. 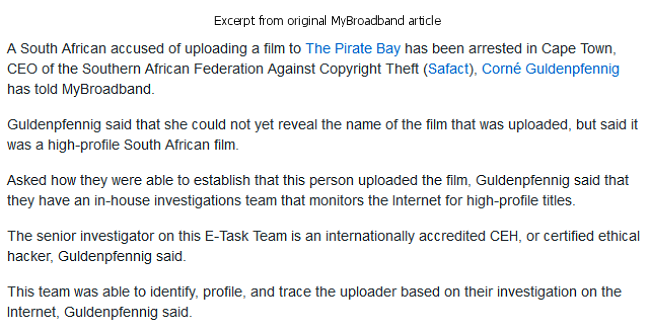 But lifting the text from a news outlet and passing it off as their own work wasn’t the end of the matter for SAFACT. HTXT.africa has noticed some other issues which for a major pro-copyright group should be a major source of embarrassment.

The problem relates to the image the anti-piracy outfit published alongside their ‘version’ of the MyBroadband piece. Courtesy of Google cache, here it is:

As can be seen from this Google reverse image search, the center photograph is actually related to the arrest of a LulzSec member carried out by the Australian police and published without the necessary Reuters credit.

The fact that the police were Australian was hidden, however, after someone working for SAFACT took the image (from a video shown on The Guardian) and Photoshopped out “Australian Federal” from the officer’s coat leaving just “police” behind. (Original below)

In an email to htxt.co.za, SAFACT CEO Corné Guldenpfennig laid the blame for the image (not the article) at the feet of their web design company.

“I wish to confirm that SAFACT would never intentionally infringe on any individual or company’s intellectual property rights as it is the mission of SAFACT to protect and enforce IPR,” Guldenpfennig said.

Quite bizarrely SAFACT has animated the graphic in a way that only highlights the fact that they ‘shopped the original image. You can see it here, but we’ve included it below for reference.

Quite possibly the most bizarre response to a copyright issue this year.