Are You An Accidental Movie and TV Show Pirate?

The relatively new Intellectual Property Awareness Foundation (IPAF) was created by the Australian movie and TV industries to “promote the value of the industry by raising awareness, understanding and appreciation of intellectual property, and its role and value in society.”

Last year IPAF embarked on a campaign to educate Australia’s children on the evils of copyright infringement in an attempt to “motivate a change in attitudes and behavior to reduce public demand for illegal copies of film and television programs.”

While many anti-piracy groups take a fairly aggressive angle when sending their message, IPAF take a more softly-softly approach. If AFACT is bad cop, IPAF is his gentler, more reasonable-sounding counterpart.

“New research, released just today, revealed that 34% of Aussies see piracy as stealing or theft but then regularly do it by burning, buying or downloading illegal or unauthorised copies of films or TV programs,” explains IPAF. “In other words, 1 in 3 of us do something that we don’t agree with. So to describe this disconnection between actions and beliefs, we coined the phrase ‘Accidental Pirate’.”

Right. So people know piracy is ‘wrong’ but because they still carry on it’s an ‘accident’? That doesn’t seem to fit very well does it? 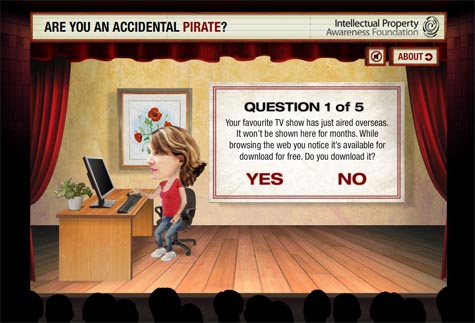 You can see what IPAF are trying to do though, it’s just badly executed. If you’re going to educate people on the premise that they didn’t know that their actions were ‘wrong’ in the first place (so as not to immediately antagonize them), at least don’t patronize them. “There, there, you know it’s wrong but let’s just pretend it was an accident, eh?” Please.

So what does the campaign have to say. Well, it’s pretty much standard stuff. The campaign’s homepage is running a Flash questionnaire with five questions that readers have the chance to answer. Getting a question right gets a round of applause from the assembled cinema audience, but getting one wrong gets a big X and a short lesson in copyright.

Questions 2, 3 and 5 all involve copying or buying pirated copies of real DVDs and the legalities of that. People don’t ‘accidentally’ believe that pirate DVDs are legal – do they?

Questions 1 and 4 involve file-sharing but if the industry IPAF claims to protect would simply get their act together, these questions wouldn’t even be necessary.

Question 1: Your favorite TV show has just aired overseas. It won’t be shown here for months. While browsing the web you notice it’s available for download for free. Do you download it?

Every time TV-show downloaders in Australia are asked why they do what they do, one of the top answers is always because they are treated like second-class citizens when it comes to release dates. Why do their favorite series take months to appear officially down under? Whatever the reason, it’s a very, very poor one, and no surprise people turn to BitTorrent.

Question 4: You’re browsing the Internet and come across a free download site. You notice a movie that’s just hit the cinemas here. Do you download it?

If people find those then, yes, they probably would. The movie industry is always very clear – if you see a brand new movie on the Internet it’s illegal, because we (stubbornly) don’t offer this service. This type of piracy could be all but wiped out by offering people a legal alternative at a reasonable price in their own homes.

Quiz aside, it’s all pretty much standard stuff. Movie industry people and actors rolled out to make ‘accidental’ pirates feel sorry for the little guy in the film-making world.

You can take the questionnaire for yourself. If you get any ‘wrong’ move directly to the back of the class, put you hands on your head and please try to do better in the future. And stop accidentally downloading torrents. The movie industry depends on it.