Yesterday, the Dutch Government announced plans to outlaw downloading of all copyrighted material and measures to make it easier to block websites that facilitate copyright infringement. An interesting move, particularly since a survey they published on the same day shows that artists’ views on file-sharing are not all that negative.

Through an elaborate survey the Government wanted to find out more about the views of artists on piracy, DRM, and other opportunities and challenges they face in the digital era. The questions covered in this article were answered by nearly 4,000 artists of all ages, including musicians, filmmakers, authors and photographers. The results give a unique insight into the position of artists on this controversial subject.

One of the results that stands out directly is that artists are pirates too. Not all of them of course, but a healthy percentage. Of all the respondents surveyed on the subject, 22% indicated that they had downloaded copyrighted works without the owners’ permission in the last 12 months. Another 71% told the researchers they hadn’t downloaded anything without permission during this period, and the remaining 7% didn’t know, or didn’t want to answer the question.

A follow up question among those who admitted to downloading others’ copyrighted works, found that music is by far the most downloaded media type. Over 80% of the downloaders downloaded music, and little over 40% also downloaded movies. Other categories such as E-books and games were less popular, with around 5% downloaders interested in these works.

Aside from their own ‘piracy’ habits, the survey also asked the respondents about their role as ‘victims’ of unauthorized file-sharing. 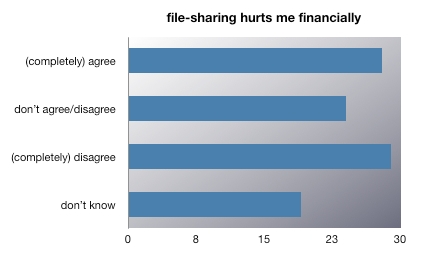 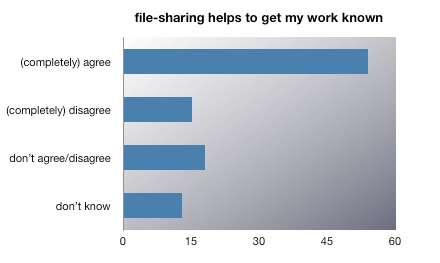 Finally, the artists were also surveyed on whether individual file-sharers should be treated more harshly. Interestingly, close to 60% indicate that they should, with an even higher percentage among the older artists. Even among the people who admitted that they were downloading without permission, nearly one third said that harsher measures are needed to deter file-sharers.

All in all it can be concluded from the survey that the majority of Dutch artists don’t believe that unauthorized file-sharing is hurting them financially, and that it may actually help them to gain a larger audience. Despite these liberal views, a majority of the artists support harsher measures against unauthorized file-sharing and for DRM to ‘protect’ their works.

A mixed message, but one that’s hopeful, especially since the younger generations recognize the benefits of sharing, even when it’s without permission.