For more than two decades, copyright holders have sent takedown notices to ISPs to alert account holders that their connections are being used to pirate content.

In the past, subscribers could simply ignore these warnings if they wanted, as there were virtually no repercussions.

AT&T and other ISPs publicly stated that they would never disconnect customers without a court order, arguing that only a court can decide what constitutes a repeat infringement.

After rightsholders filed several high-profile lawsuits against ISPs, most providers revised their policies. In AT&T’s case, the ISP launched a dedicated copyright portal and began terminating the accounts of subscribers repeatedly targeted with piracy allegations.

AT&T doesn’t disconnect subscribers without giving them advance notice, of course. After the initial warnings, they get the chance to take steps so that future infringements are prevented. This can get pretty hands-on as it involves a mandatory educational ‘copyright tutorial‘.

If subscribers fail to resolve the issue, more harsh measures come into play, with a permanent disconnection as the ultimate punishment. This option is clearly laid out in the AT&T Copyright Alert Program.

“If multiple violations occur, AT&T will take action, which may include terminating your internet service,” the provider writes.

With this much on the line, most subscribers take the piracy warnings quite seriously. The ISP will be happy with that but many subscribers are less happy with how AT&T is handling things at its end.

Complaints About a Buggy Copyright Portal

Over the past few days, there have been several complaints from subscribers who can’t acknowledge that they have received piracy notices or are unable to complete the required copyright tutorial.

These complaints are not new. We have spotted numerous threads over the years and the issue regularly flares up. While these might be occasional technical difficulties, they are quite frustrating for people who might lose their Internet access.

A small selection of recent messages are listed below:

I’ve recently gotten an e-mail telling me about a copyright noticed and as I attempt to do the tutorial I keep getting Server Error issue so i’m unable to complete it. Do they really shut off your internet if you don’t complete it?” – User2022

“I’m told to login and go to att.com/copyright-infringement to acknowledge that I have received this alert. But when I do that there is absolutely nowhere that I can acknowledge it. Everything ends up a dead end!” – Julius

“Why can’t I access the Tutorial? Is there anyone at ATT I can talk to to get some help with this issue. The latest letter I received says they will reduce my internet access if I do not take the Tutorial.” – jimb0g

“You cant threaten to turn off my internet when your own website prevents me from doing it. I need a solution ASAP.” – FrustratedCustomer89

Most of these calls for help are not immediately answered by an AT&T employee. However, there is an ‘award-winning’ forum user named Tonydi who regularly chimes in to confirm a recurring problem.

“This situation keeps coming up in here over and over, literally for years. AT&T must have recently sent out a bulk mailing because all of a sudden it’s become a popular subject in the forum again,” Tonydi writes. 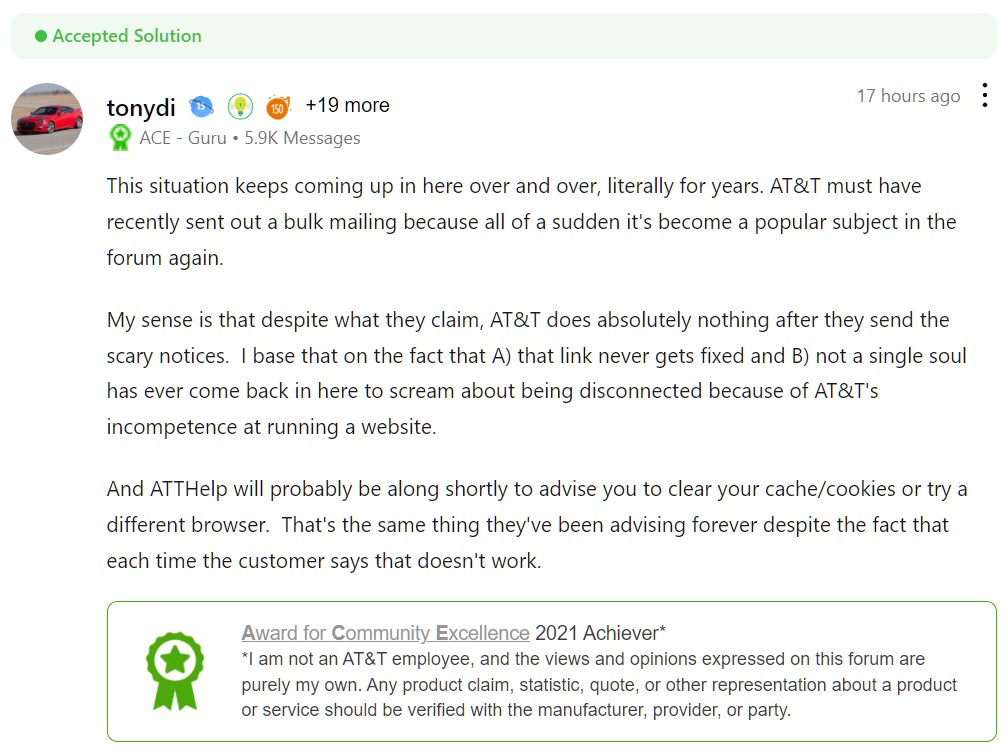 Most subscribers are reassured by his suggestion that AT&T does “absolutely nothing” after they send the scary notices. However, as we highlighted earlier, the ISP has terminated subscribers in the past, so ignoring the matter isn’t without risk.

It’s unclear if the complaining subscribers eventually sort out the problem. In most cases, an AT&T employee eventually responds to the complaints with some advice but that doesn’t always lead to a solution.

For example, we spotted a response from a subscriber who was directed to call the Digital Assistance Center after the initial advice failed. This person was then sent back and forth between different customer service departments. Despite spending an hour trying to resolve the matter, the problem persisted.

The above clearly suggests that AT&T’s handling of piracy complaints can be quite buggy at times and could use some more attention. Especially when people are threatened with losing their Internet access.

We reached out to the Internet provider asking for a comment on our findings. While it didn’t go into the possible terminations, an AT&T spokesperson replied with the following statement.

“We take allegations of copyright infringement very seriously and are committed to helping our customers understand how to comply with the law. The online tutorial is just one of several resources we offer and customers may contact us with questions at any time.”