Aurous Offers to Shut Down But RIAA Isn’t Interested

It’s been an eventful month for music discovery tool Aurous. Within days of its October 10 launch, Aurous Group and developer Andrew Sampson were being sued by the RIAA.

“This service is a flagrant example of a business model powered by copyright theft on a massive scale,” the RIAA said.

Judge Jose E. Martinez declared that Sampson and everyone else associated with the Aurous project were forbidden from “infringing, or causing, enabling, facilitating, encouraging, promoting and inducing or participating in the infringement of, any of Plaintiffs’ copyrights protected by the Copyright Act, whether now in existence or hereafter created.”

Those restrictions including any further making available of the Aurous software in any form but there are now claims that Sampson has already breached the order.

According to a motion filed yesterday by the labels, on October 23 following a request from defendants’ counsel, it was agreed that the defendants would be given more time (until November 13) to respond to the original complaint. In the meantime the temporary restraining order (TRO) would remain in force.

However, the RIAA says that less than two days after the extension was agreed, the defendants “flagrantly violated [the TRO], in the most damaging way possible.”

“Shortly after 1:00 p.m. on Sunday, October 25, Defendants announced that they had publicly released the core ‘back-end’ source code for Aurous, which contains the instructions for exactly how the Aurous software finds, retrieves, and downloads (copies) unauthorized copies of recorded music,” the labels write. 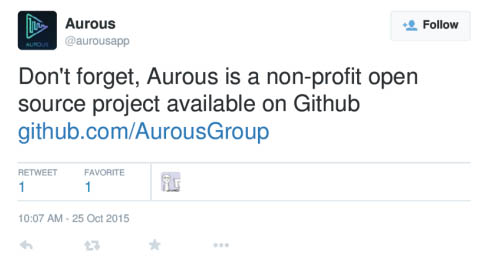 “At 1:07 p.m. Eastern time on Sunday, Defendants sent a tweet from the official Aurous Twitter account announcing that Aurous was now an ‘open source project available on Github’ and providing a link to the Aurous source code repository on the website GitHub.com.”

The tweet and Github posting have both since been removed. However, in their court filing the labels says that they managed to secure copies while characterizing the deletions as an attempt to destroy evidence. 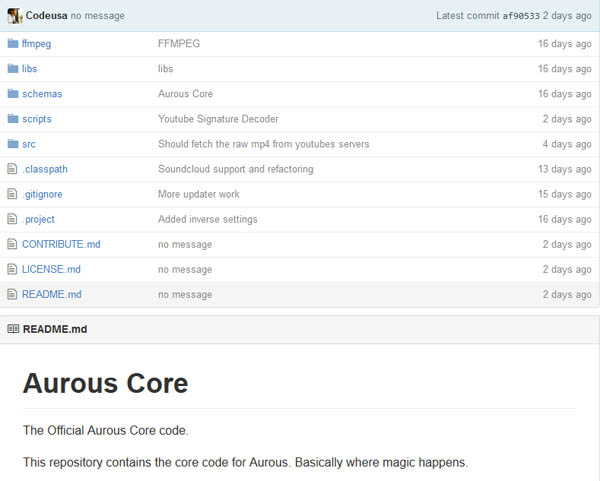 Describing the ‘core’ as the “critical ‘back-end’ source code” powering Aurous, the labels say that by posting the code Sampson breached the terms of the TRO. Furthermore, the labels claim that the release proves that Sampson continued working on Aurous after the TRO was issued in an effort to improve its ability to retrieve and download infringing content.

“There can be no doubt that Defendants did so with the intent of releasing an improved version of the software to the public, notwithstanding this Court’s explicit and unambiguous prohibition against doing so,” they write.

Following the Github release the labels contacted Aurous demanding an end to the violation of the TRO. They also advised the music service that their consent to a delay for the preliminary injunction hearing should now be considered withdrawn.

Counsel for Aurous responded by noting that the breach of the TRO had been accidental and even offered to throw in the towel completely on behalf of his clients.

“Our clients are willing to transfer control of the Aurous domain and anything else you may require including closing the site and all operations (which may have been done already) provide access to their github and social media accounts as early as tomorrow if this proposed settlement can be kept forthwith,” Aurous counsel wrote in an email.

“Our clients have acted in good faith to uphold the proposed settlement agreement and not violate the TRO. Again this is only a misunderstanding that should be bridged in order to serve the best interests of all parties.”

In response the labels dismissed the offer, insisting that the breach had been both intentional and damaging.

“During the five hours or more that Defendants willfully made the core Aurous source code available to the public, while brazenly urging their Twitter followers and other members of the public to visit the repository where it was housed, an unknown number of third parties accessed and copied the source code,” the labels explain.

In the background of this current dispute is Aurous’ response to the RIAA’s allegations that it offers an illegal service.

“The allegations that the purpose of this website is to pirate music is false
and unfounded. Aurous exists for the purposes of bringing together multiple sites all with DMCA takedown capabilities and anti-piracy bylaws,” Aurous’ counsel informed the court.

“Aurous in no way encourages, the downloading or playing of copyrighted music.
Additionally, Defendant maintains a DMCA takedown email. To date, Plaintiff has not submitted any DMCA takedown requests, and simply initiated a lawsuit within days of the website’s publication.”

Aurous says that if the RIAA removed the illegal content from the third-party sites, the Aurous software would not be able to play it. It also claims that the source code released on Github was an old and obsolete version of the software. Nevertheless, the RIAA seems entirely disinterested and is currently overwhelming Aurous with its legal might.

As a result the labels are now asking for Aurous Group and Sampson to be held in contempt of court and punished via monetary sanctions. Perhaps of concern for those who downloaded it, the labels also ask the court to force the defendants to provide a “precise description of when, where, and to whom they disseminated the Aurous application and source code” after the TRO was granted October 15.

While the case is not over yet, the Aurous dream seems well and truly dead. All that remains is to discover how painful it will for those behind the project.