In common with many countries in Europe, Austria couldn’t escape pressure from rightsholders to implement site blocking to prevent piracy.

Local ISPs didn’t like the idea but following a ruling by the European Court of Justice in 2014, rightsholders took legal action to have sites blocked. ISPs fought all the way to the Supreme Court, but to no avail. Concerns over net neutrality were also brushed aside.

Movie companies went on to target several major streaming sites and then in 2015, The Pirate Bay, 1337x and other torrent sites were blocked following action by music industry group IFPI.

In the years that followed, many more domains were blocked following rightsholder complaints. Publishers also joined the action with Sci-Hub and Libgen blocks but at the end of 2019, instructions for ISPs to block pirate sites suddenly stopped after several domains belonging to notorious streaming site Movie4K were added to the register.

After a considerable pause, last week ISPs were instructed to block a new batch of domains following legal action by Satel Film GmbH. They included domains operated by BurningSeries, SerienStream, Fmovies and SeasonVar – around 30 overall. Another blocking order, obtained by DOR Film, targeted another 40 domains.

The ISPs also received instructions to block music piracy site Canna Power. If the instructions had stopped at Canna-Power.to and Canna.to, that would’ve been the end of the matter, but that wasn’t the case here. 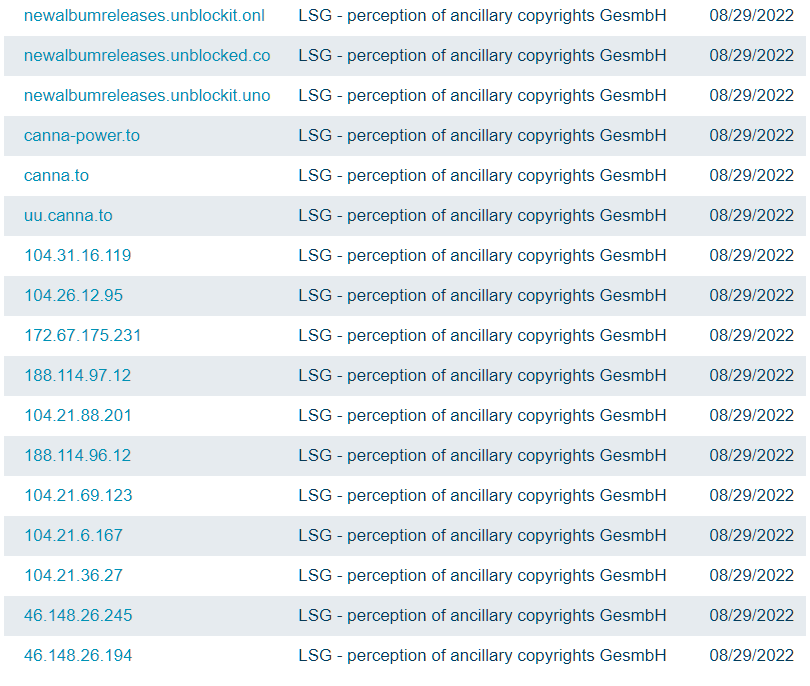 The court-sanction blocking instructions also contained a list of IP addresses to be blocked at the same time – all of them belonging to Cloudflare and used by a large number of innocent sites, as well as the piracy site in question. After more than a decade of blocking orders around the world, this was a rookie mistake but that didn’t reduce the consequences.

ISPs Had No Choice But to Obey The Court

Up until now, ISPs have been given lists of domains so that blocking can be conducted by DNS. This time IP addresses were supplied in addition to domains and because non-compliance can lead to legal action, ISPs had no choice but to follow the orders. Worryingly, ISP Magenta said that the whole thing could’ve been avoided.

Previously, through a process involving the Austrian Regulatory Authority for Broadcasting and Telecommunications (RTR), it was possible for ISPs to offer their input on blocking. That is no longer the case.

“In the past, RTR had the option of a determination procedure. Internet providers could use this to check in advance whether a block is permissible or not. However, this procedure no longer exists due to a supreme court ruling,” the company told Der Standard.

In this case, RTR can check whether the blocks are admissible, but only after the damage has been done.

Approached for comment, Cloudflare said it was working hard to find a way around the blocks. It also called for the public to get involved in the debate while putting pressure on the government.

“We are currently working on finding a technical solution for the affected websites. At the same time, Austrian Internet users are being asked to put pressure on politicians. Perhaps then the knowledge will prevail there that the blocking of IP addresses always has undesirable side effects,” the company’s statement reads.

Blocking can have undesirable side effects but the more fundamental problem is the drive to conduct site blocking via agreements between stakeholders, negotiated in private processes, with no public oversight.

If Austrian ISPs hadn’t published the details of what they are required to block, the public would’ve had blank screens and no answers today. Publishing blocking lists for scrutiny should be required wherever blocking is put in place but according to rightsholders, that only serves to encourage piracy.