The aXXo rip was shown on an iMac displayed on an Apple stand at a John Lewis store. A member of the Hexus forums discovered this remarkable promotional material, and writes:

“So I was in my local John Lewis store a week or so back, and I was checking out their new little Apple mac area, which had lots of Macs on display, with some desks setup and other accessories. They also had some wall mounted iMacs. Imagine my surprise when getting closer to one of them to see ‘Pirates of the Caribbean: Dead Man’s Chest’ – ripped by Axxo playing.”

Using a ripped DVD is bit odd because this is certainly not the best promotional material. Regular DVDs or free HD-content looks much better on an iMac monitor.

One thing is clear though, aXXo’s presence has now moved beyond the Internet, and for him it must be flattering to see that commercial outlets appreciate his work. Perhaps this might motivate him to return?

The last official aXXo torrent was uploaded November 11, after that it has been awfully quiet. There were rumors that he got caught, others said he had an accident. However, the official statement is that he decided to take a break.

John Lewis was not available for comment, the MPAA probably wont appreciate it that much, but they have our support.

Update: John Lewis replied to Hexus with an official statement: “Thank you for bringing this matter to our attention. We have fully investigated the incident and the shop has removed and destroyed the clip. We have also taken the necessary steps to ensure that the replication and publication of pirate material in any form does not take place in our shops. This incident is not reflective of our policy and we take very seriously the copyright laws and would not intentionally break any of these rules or regulations.” 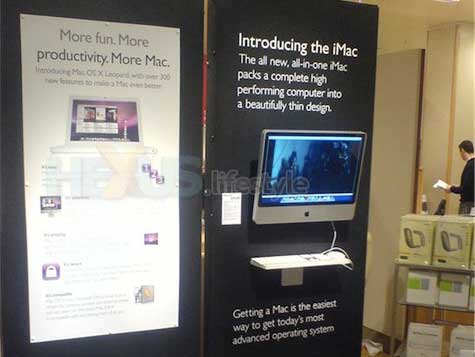