For those who’ve keenly followed the past five weekly episodes of the BBC’s Planet Earth II series, it’s been a magical experience. In a world obsessed with the monotony of reality TV, Sunday nights in the UK have rarely been so awe-inspiring.

But while UK license-payers have been enjoying early access to the show, those elsewhere will have to wait for the show’s appearance on regular TV. The United States, for example, must wait until January 2017 to experience its wonders on BBC America. Unless they have access to the Internet, of course.

Ever since the first episode’s debut on BBC, each installment of the series has been uploaded to torrent and streaming sites after airing. However, more than a week ago someone obtained a copy of the series on Blu-ray and uploaded every episode to the Internet, including the season finale “Cities” which airs tonight.

As can be seen from the image below, one of the copies was sourced from an official Blu-ray disc before its official release, produced and distributed by BBC Worldwide. 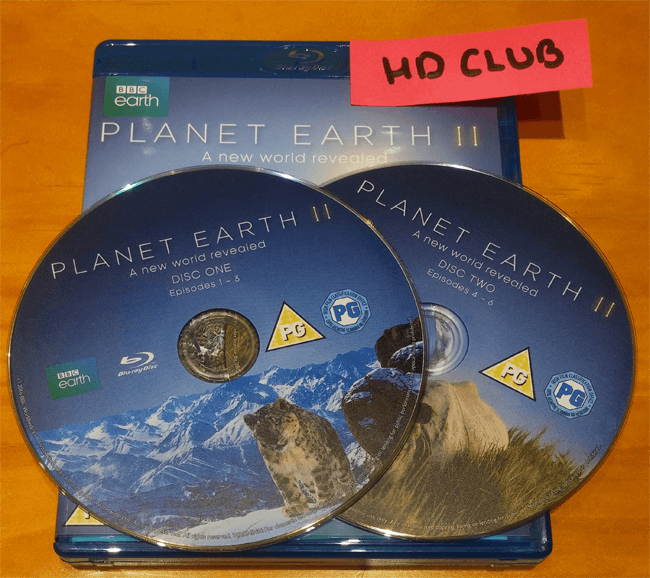 The hand-written label suggests that the copy might have been destined for semi-private Russian tracker HD Club, although it’s possible more copies were available elsewhere.

While an early leak of an episode of Game of Thrones, for example, would have made worldwide headlines, the leak of Planet Earth II before its finale has been more low key. However, behind the scenes the BBC has been furiously trying to protect the show.

Since November 7, the day after the first episode aired, US-based anti-piracy company MarkMonitor has been regularly sending notices to Google which target many thousands of copies of the show on hundreds of file-sharing sites.

Up until the last day of November these notices targeted only copies of shows that had already aired, but following the leak of the Blu-ray (which contains the season finale), things got more serious. The first takedown send to Google in December targeted nearly 400 URLs, a tiny sample of which can be seen below.

A handful of the takedowns sent to Google 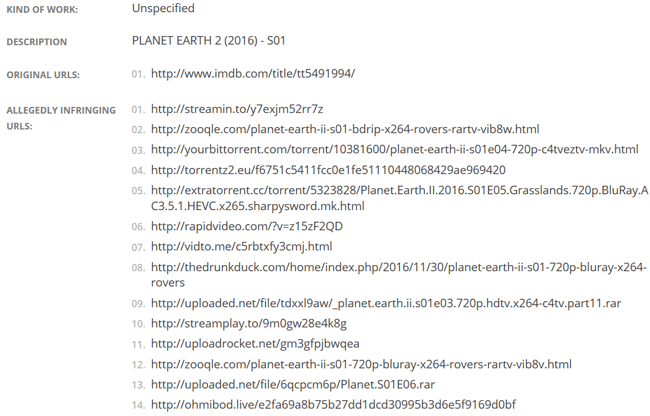 On December 2, another 485 URLs were hit by the BBC, 562 two days later, and a further 456 the day after that, adding to the many thousands already sent.

TorrentFreak spoke with BBC Worldwide to find out more about their efforts to keep Planet Earth’s finale fresh but perhaps understandably they didn’t want to say too much.

“Piracy is illegal wherever and whenever it happens – before or after a programme is broadcast,” Dan Phelan, BBC Worldwide’s Head of Communications, told TorrentFreak.

“We take it seriously whatever the source and will work hard to get it taken down.”

But while the BBC are unquestionably doing just that, once again there appears to be an issue with pirates fulfilling unmet demand. Planet Earth II won’t get released on TV in the states until January 28, 2017, which considering the massive buzz around the show online, undoubtedly means that some will choose to pirate instead. 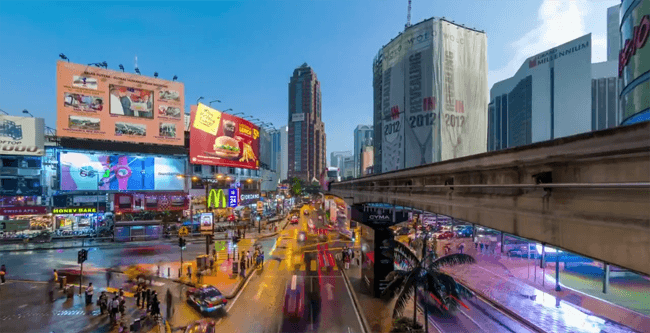 Of course, there are many avenues to do that (such as torrents and illicit streaming) but some are taking a third approach.

In common with all big shows on the BBC, Planet Earth II appears on the corporation’s iPlayer service, both live and in catch-up form after airing. The iPlayer tries to keep foreign users out but in reality, the use of VPNs and even some easily installed browser plug-ins can easily circumvent the measures in place.

The Planet Earth II finale “Cities” will air on BBC1 at 8pm tonight. For those looking for a more permanent keepsake, the Blu-ray is also now officially on sale.