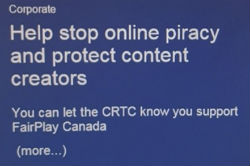 Last month, a coalition of Canadian companies called on the local telecom regulator CRTC to establish a local pirate site blocking program, which would be the first of its kind in North America.

The Canadian deal is supported by Fairplay Canada, a coalition of both copyright holders and major players in the Telco industry, such as Bell and Rogers, which also have media companies of their own.

Thus far, there’s been a fair amount of opposition to the proposal. While CTRC is reviewing FairPlay Canada’s plans, OpenMedia has launched a petition to stop the effort in its tracks, which has already been signed by tens of thousands of Canadians.

However, there are also people who are backing the blocking efforts. In some cases, with a gentle push from their employer.

Canadian law Professor Micheal Geist, who’s one of the most vocal opponents of the blocking plans, recently tweeted a note Bell sent to its employees. Through an internal message, the ISP asks its workers to “help stop online piracy and protect content creators.” 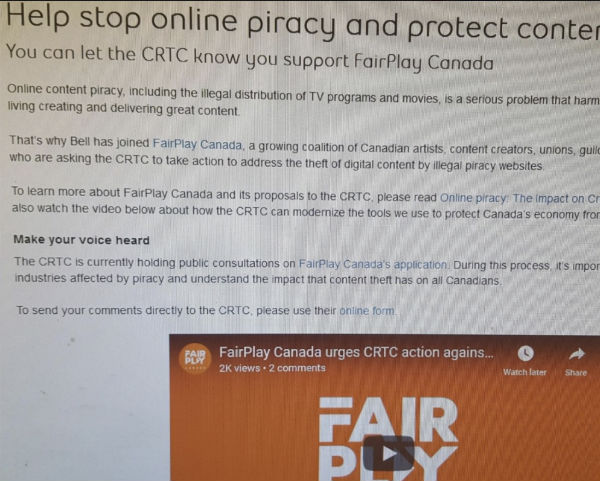 The company clearly hopes that its employees will back the site-blocking agenda, but according to Geist, this may not be the best way to do it.

Geist points out that the internal message doesn’t encourage employees to disclose their affiliation with Bell. This raises eyebrows, in particular, because Bell agreed to a $1.25 million settlement in 2015 after it encouraged some employees to write positive reviews and ratings on Bell apps.

In this case, the message has nothing to with app ratings, but it’s clear that the company is encouraging its employees to support a regulatory effort that serves Bell’s interests.

“All Canadians can provide their views on the website blocking proposal, but corporate encouragement to employees to participate in regulatory processes on the company’s behalf may raise the kinds of concerns regarding misleading impressions that sparked the Commissioner of Competition to intervene in 2015,” Geist’s writes in a blog post.

Even if Bell’s request is ‘fair play’ and within the boundaries of what’s allowed, it may do more harm than good.

Geist’s observation was picked up by local media with iPhoneinCanada