Piracy monetization firm Rightscorp has made several headlines recently, often because of its aggressive attempts to obtain settlements from allegedly pirating Internet users.

The publicly traded company ask U.S. ISPs to forward DMCA notices to subscribers, with a settlement offer tagged on to the end.

On behalf of Warner Bros, BMG and other copyright holders Rightscorp asks subscribers to pay $30 per pirated file, or risk a potential $150,000 ‘fine’ in court.

Today we can add another setback to this list. For the past few days prominent anti-virus vendor Bitdefender has been blocking the company’s website after categorizing it as malware. 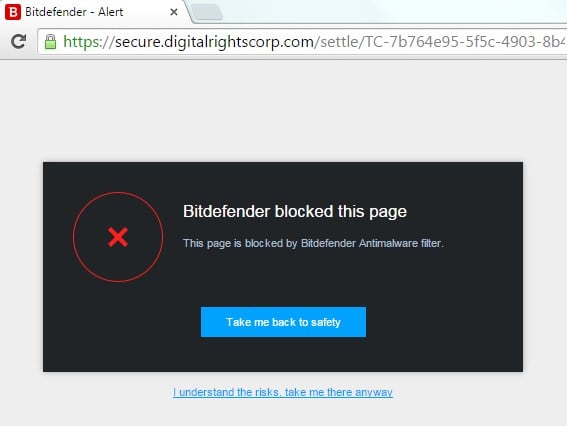 It’s unclear why Bitdefender has listed Rightcorp’s website as malware but it’s certainly plausible that the huge amount of settlement emails linked to a payment request raised a red flag.

In any case, Bitdefender users are less likely to pay up if their anti-virus software warns them not to visit the page, which can only further hurt Rightcorp’s already meager revenues.

Despite sending out millions of notices Rightscorp has yet to turn a profit. The company continues to trade at a loss and recently increased its settlement amount by 50 percent, hoping to get out of the red.