BitSmash will be launched officially on October 15th, but the website is already fully operational. The project looks promising, and might prove to be a great tool for those who are interested in BitTorrent trends, including ourselves. One of the major downsides at the moment, however, is the accuracy of some of the statistics that are reported by BitSmash.

We’ve gone through the data, and it seems that BitSmash is off on the numbers of seeds and peers. One of the top downloads according to the service is The Incredible Hulk, with 414 peers and 139 seeders. However, Mininova and several other BitTorrent sites report that the torrent has more than 15,000 peers, and a manual scrape of one of the trackers returned close to 18,000 peers.

The service is of course still being developed, so these numbers might be corrected later. Smash, the founder of the project told us: “I’m going to stand by our numbers,” but said he will take a look at the inconsistencies. He encourages everyone to submit feedback while the site is in Beta.

Interestingly, BitSmash has decided to include a link to the .torrent files on their detail pages, which basically makes it a meta-search engine as well. The anti-piracy lobby might not be too happy about that. A few days ago we reported on the Swedish news site Nyheter24, that was criticized for linking to torrents on The Pirate Bay.

The service will officially launch October 15th, and later this year there will also be an API available for other services and websites to access, who can use the data for other purposes. Overall we think that BitSmash could develop into a great research tool. It’s worth checking out. 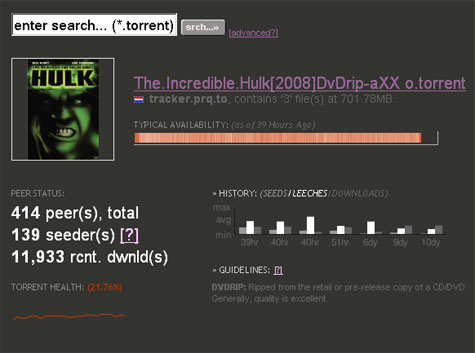