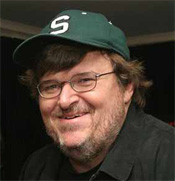 Moore’s latest documentary, Slacker Uprising, is only available for free in Northern America. People who attempt to download the torrent elsewhere get this annoying “Sorry” message. Since there are no geographical restrictions on the official torrent file, however, it was easy to share the film with the rest of the world. It would only take one person to upload the torrent to another site, and the rest of the world would have access to it. That’s exactly what happened.

In last week’s article, we asked the question: “Is this deliberate, or accidental?” Since it is so easy to share the documentary with people outside the US and Canada, we hinted that this might have been done on purpose. A few days later, Michael Moore contacted us, with a direct response to the question we posed.

“What do you think I’m up to? I know it may not be obvious to most, but I think you guys get it,” Moore wrote to us. “I only own the US and Canadian rights. So my hands are tied. But this is the 21st century. What are ‘geographical rights’ ?” Moore continued. “I’ll say it for the hundredth time: If I buy a book and read it, and then give you the book to read, I have broken no laws. Why is that not true for all media?”

“I wish someone would figure out what I am up to,” he concluded. We believe many people have by now. This isn’t the first time Moore has clashed with the ‘rights holders’ of one of his own films. Last year The Weinstein Co. went after websites that hosted “Sicko”, while Moore publicly said that it was ok for people to download his movie illegally. “I’m not a big believer in our copyright laws. I think they’re way too restrictive,” he said at the time.

Even further back, in 2004, Moore also backed the people who downloaded his documentary Fahrenheit 9/11. “The more people who see it the better, so I’m happy this is happening, he said. “Is it wrong for someone who’s bought a film on DVD to let a friend watch it for free? Of course it’s not. It never has been and never will be. I think information, art and ideas should be shared.”

Perhaps it’s time to do a documentary on the anti-piracy and pro-copyright lobby Mr. Moore? They might not kill our children in the US or overseas, but they do kill creativity, innovation, and the spread of knowledge. Worth looking into.