BitSnoop was one of the most successful new torrent site launches of 2009. The site only went public in October last year but quickly gained a large user base. Unfortunately, the site suddenly disappeared in February due to several crucial mistakes.

“Our host has screwed up hard drive replacement in RAID array,” the BitSnoop team informed TorrentFreak. “They’ve replaced the wrong drive two times in a row, which caused all data to be destroyed. We did not have full backup at that moment, so it was partly our fault.”

More than two months of downtime followed, but a few days ago the site came back online. The new and improved BitSnoop is now indexing 3,624,747 torrents that are worth an impressive 3,177,958 gigabytes of data. In addition to adding more content, the site also implemented several new features and upgrades.

“While we were looking for new hosting and rebuilding indexes we took the opportunity to roll out the new Bitsnoop,” we were told. Among these new features are support for Magnet links, a Safe Search option, tracker reports and FakeSkan, a feature that spots ‘fake’ torrents.

FakeSkan checks all torrents for several suspicious characteristics that might indicate that the file is not what it claims to be. It it finds passworded archives or WMV files labeled as DVDrips, for example, it is clearly labeled as a ‘fake’ torrent. On the other hand, torrents coming from trusted sources are automatically labeled as ‘verified’.

“At the moment all this is done algorithmically and there are not really hundreds of checks yet, just the most obvious ones. We’re going to maybe use neural net for this – lots of data for training,” the BitSnoop team told TorrentFreak. Thus far FakeSkan has marked 162,414 torrents as fake, approximately 5% of all the torrents on the site.

Although FakeSkan seems to be very effective, the Bitsnoop teams admits that there are still some false positives, especially in the adult category. This is an issue that is currently being worked on, together with other minor improvements.

Last but not least, BitSnoop has learned from its mistakes and is making proper backups now to prevent more shameful failures in the future. 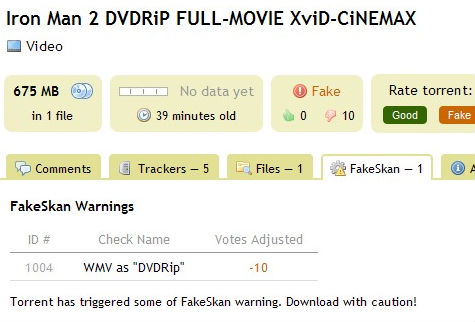