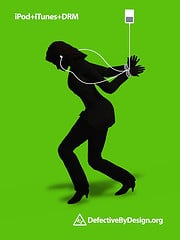 It’s not just iTunes, but every other restrictive DRM ecosystem. According to Navin, the same holds true for the protection enforced by the Zune Marketplace, if it achieves a considerable amount of market share. The reason he didn’t mention Microsoft’s PlaysForSure DRM could be because it allows users to transfer songs to devices from more than one manufacturer.

Speaking on a panel at the International Consumer Electronics Show (CES) , Navin said that Apple’s Fairplay and Microsoft’s new Zune DRM were too restrictive because content encoded in these proprietary formats locks users into a single ecosystem. What if a user wants to purchase a device produced by another manufacturer? All the content he has already purchased will be incompatible. This will cause the person to pirate the content he has already bought, possibly more than once. “The lock-in you get from iTunes [or Zune] is great when you love the device you got from either one of those vendors,” he said. “But if you don’t, the amount you’ve invested [in purchasing media files] is worthless,” he said

Is it Navin’s place to criticise DRM when his own company is about to launch a video store that is going to offer content “infected” with Microsoft’s platform-dependent Windows DRM? To be fair, BitTorrent Inc says that if they had it their way, content on their upcoming video store would be completely free of DRM. Apparently, it was the content producers who were adamant about it.

This isn’t the first time Navin has made a controversial statement. Last month, he was quoted saying that his company’s site, BitTorrent.com doesn’t index illegal torrents, something we proved was clearly not the case.

Video: Ashwin Navin on the History of BitTorrent