BitTorrent Inc, the company behind the successful uTorrent and BitTorrent file-sharing clients, has been making huge efforts in recent times to shed the false image that it is synonymous with mass online piracy.

The company’s tools can of course be put to illegal uses, but so can those of a thousand other companies in thousands of cities worldwide. The company has been relentless in its quest to get this message to the masses, but it’s also taking another approach to boosting its image with its tech-savvy customer base.

Anyone who monitors the company’s Twitter feed will see that it regularly retweets items that relate to privacy and freedom, such as the recent NSA whistle-blower scandal for example.

Like many technology companies BitTorrent Inc. has an interest in keeping the Internet both free and open so the news today that the San Francisco-based company is behind a controversial advertising campaign doesn’t come as too much of a shock.

Last week billboards appeared in three major cities – New York, San Francisco and Los Angeles – each with a statement designed to be offensive to anyone who values freedom, privacy and a right to choose.

Your Data Should Belong To The NSA 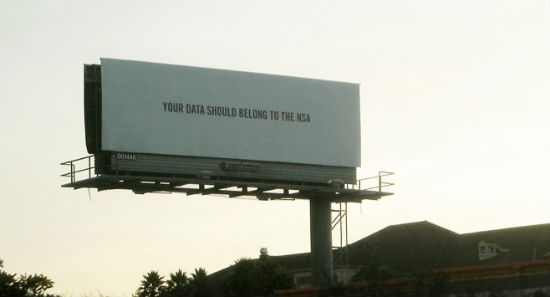 Artists Need To Play By The Rules 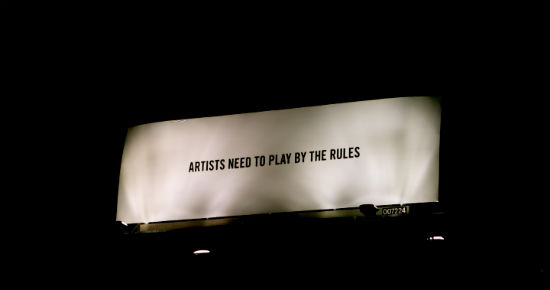 The Internet Should Be Regulated (via) 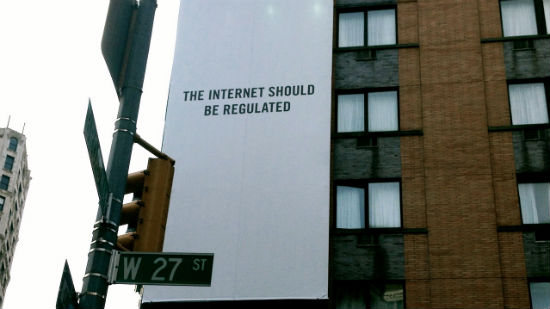 “These statements represent an assault on freedom. They also, for the most part, represent attitudes Internet culture has accepted. Chips we’ve traded for convenience. Part of the allegiance we’ve sworn to the web’s big platforms and server farms. That’s what you get for going online,” BitTorrent Inc. says of the campaign’s messages.

The company goes on to bemoan general society’s apparent eagerness to accept data centralization and along with it the distribution of personal information to powerful companies and governments who choose to exploit it.

“We’ve chosen to accept surveillance culture: the right of security agencies to violate the Fourth Amendment; to see and store data as they see fit,” the company says.

Interestingly, BitTorrent Inc. also takes a shot at entertainment companies who put content behind paywalls and suggests that all-you-can-eat outlets like Spotify, for example, fail to adequately compensate the artists.

“We’ve chosen to accept walled gardens of creativity: a lifetime of work (our life’s work) locked into digital stores that take 30% of the revenue and streaming services that pay pennies in royalties,” BitTorrent says.

Of course, the campaign isn’t simply a me-too retaliation at the revelations of the past few months and years. BitTorrent Inc. has a business model and several products that really do put the power back in the hands of the individual, from its BitTorrent Bundles through to its DIY decentralized Dropbox alternative, BitTorrent Sync and its “NSA-proof” messenger app.

With these tools and last week’s billboard campaign the San Francisco-based company hopes to capture the imaginations of Internet users who have become weary of entrusting their data to big companies and artists who want to leave the industry machine behind and take their futures into their own hands, as the updated billboards suggest. 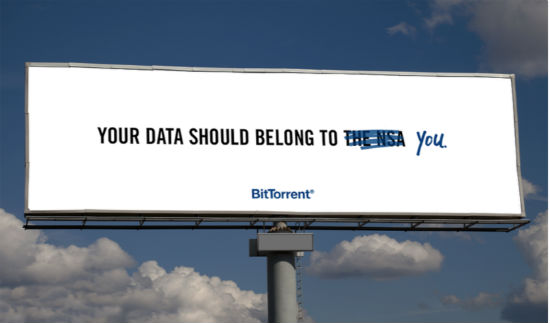 “This is the generation that will decide whether the Internet is a tool for control, or a platform for innovation and freedom. We have an incredible opportunity. We can shape the next one and one hundred years of human connection. A free, open Internet is a force for change, creativity; the backbone of a society where citizens are stakeholders, not data sets.

“BitTorrent is built to preserve that Internet,” the company concludes.