Over the past months the revelations of Edward Snowden have dominated the news.

Internet privacy suddenly became a mainstream topic and all the negative news has increased the demand for encrypted and secure communications.

Responding to this, several developers quickly jumped in with new tools to prevent the public from having their conversations spied on or their data breached. Pirate Bay founder Peter Sunde announced a new encrypted messaging service for example, and Kim Dotcom’s Mega has similar plans.

The new tool is based on BitTorrent technology and is offered free of charge to help people regain complete control over their own data.

“This year alone, more than 6 million people have been impacted by data breaches. The right to own your own conversations online: it’s not a given. It should be,” the company says.

“So over at Labs, we’re working on something that could solve for conversation security. BitTorrent Chat applies distributed technology to the idea of IM. Our goal is to ensure that your messages stay yours: private, secure, and free.” 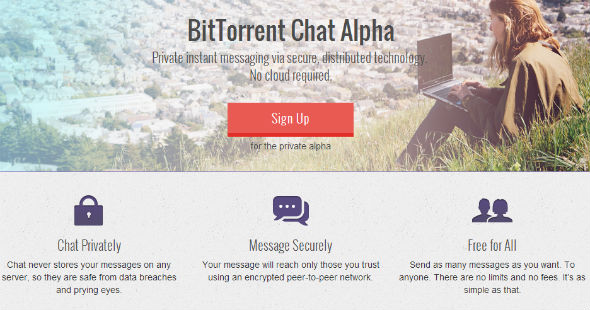 While BitTorrent Chat doesn’t store any conversations on a third-party server, it does need a central location to get the conversation going. To speak in BitTorrent terms, people have to connect to a tracker to know where the message should be sent.

The new messenger app is not the only ‘breach safe’ tool the company is currently working on. Earlier this year BitTorrent launched its Sync application which provides a secure alternative to centralized cloud backup solutions such as Dropbox and Google drive.

Those who want to give BitTorrent’s Chat application a try can head over to BitTorrent Labs to sign up for the private Alpha.