The Pirate Bay, Mininova and isoHunt combined achieve over a billion pageviews a month. These are quite remarkable statistics when you consider that together, the trio run on less than 100 servers (cf. Facebook has 10,000).

Even though most people use BitTorrent to download TV-shows, the latest Hollywood blockbusters such as Wall-E and The Dark Knight can also be found among the most popular searches. An interesting trend worth mentioning is that more people are searching for high definition content, as ‘720p‘ is a recurring term in most site search clouds. 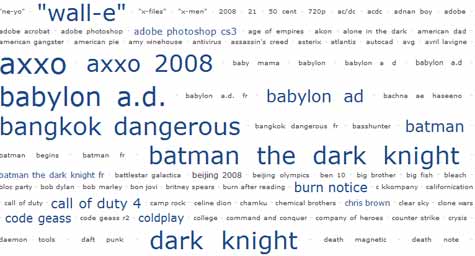