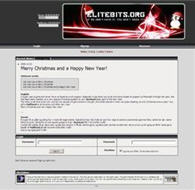 While public BitTorrent sites usually get most of the unwanted legal attention, earlier this year it was the turn of a private tracker.

In early January ‘Laeborg’, the Denmark-based administrator of the EliteBits BitTorrent tracker, was confronted at 7:00am on his doorstep by a man from the enforcement court accompanied by three men from Johan Schlüter Advokatfirma, a law firm that works with Danish anti-piracy group, Antipiratgruppen.

They showed Laeborg, real name Jonas Laeborg, screenshots from EliteBits while revealing information on the bank account used to collect site donations. In their possession was a warrant which they said gave them authority to gather evidence to show that Laeborg was involved in the illegal distribution of copyright works.

After accessing Laeborg’s computer and his admin account on EliteBits, screenshots were taken of all the staff profiles, the site’s Top 10 downloaders, Top 50 uploaders and uploaded torrents lists.

That case has now progressed to the point where 18 year-old Laeborg has been hit with a cash claim totaling some 1.6 million kroner ($261,150) from Antipiratgruppen. But he won’t face this battle alone.

Laeborg apparently has insurance which will cover his legal costs while fighting this demand but his policy has an excess on any claim. Pro-sharing group Piratgruppen has announced it will donate an amount to cover this excess charge to help ensure the case gets heard.

“We believe it is extremely important that these cases come to trial, and that you can not just give in to these unreasonable claims, therefore we have paid a sum to cover costs associated with litigation,” Piratgruppen spokesman Troels Møller told Comon.

The case will be handled by regular Piratgruppen lawyer Per Overbeck but no dates have yet been set for a hearing.

The attack on EliteBits represents a new strategy against file-sharing in Denmark. Previously local anti-piracy outfit Antipiratgruppen had maintained a policy of going after individuals but its inability to gather solid evidence resulted in the loss of several prominent High Court cases. This prompted an announcement that it would stop its pursuit of petty file-sharers and instead go after larger targets.