Over the past two years a series of domain name seizures by Homeland Security’s ICE unit have resulted in a mild panic among the owners of file-sharing and streaming sites.

Knowing that they could lose their domain names without warning or due process, many have secured alternatives. Others have taken things a step further by moving their sites to non-U.S. controlled domains as a precaution.

The Pirate Bay, for example, traded in its .org domain for a Swedish .se TLD earlier this year. Others BitTorrent sites including Demonoid, Torrentz and KickassTorrents took similar measures, as did several file-hosting and streaming portals.

The operators of these sites chose domain names that don’t fall under the jurisdiction of the United States under the assumption that they are better protected against seizures. However, yesterday it became clear that this is not necessarily the case.

On ‘Cyber Monday’ ICE announced yet another round of seizures, this time with help from European law enforcement agencies and Europol and dubbed Project TransAtlantic. 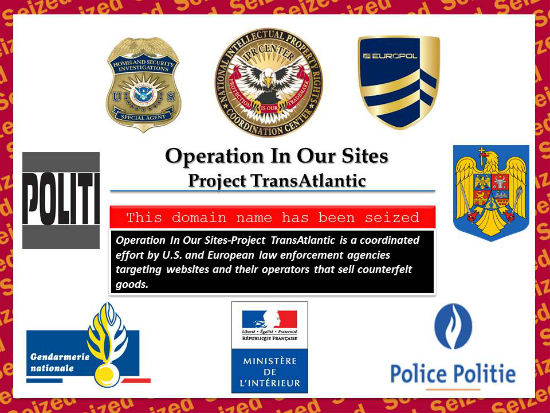 “Recognizing the global nature of Internet crime, this year the IPR Center partnered with Europol, who, through its member countries, executed coordinated seizures of foreign-based top-level domains such as .eu, .be, .dk, .fr, .ro and .uk. This effort is titled Project Transatlantic and resulted in 31 domain name seizures,” ICE states.

The authorities haven’t released a list of the European targets but chaussuresfoot.be, chaussurevogue.eu and eshopreplica.eu are included. In Denmark Cardsharing.dk was seized but the site might not fall under the same operation as it displays a different banner. Also, the Cardsharing domain is more piracy than counterfeit-related as it allows users to share access to pay TV.

It comes as no surprise that operators of file-sharing and streaming sites are concerned about these new developments. While yesterday’s actions were mostly targeted at retailers of counterfeit goods, similar efforts could easily cross over to “pirate” sites.

TorrentFreak talked to several BitTorrent site owners, and all fear that this may be a test case for a new round of piracy-related seizures. The general opinion is that by including the European domain names, ICE and partners are signaling that no domain name is safe.

The Pirate Bay team, currently operating under a .se domain, shares the concerns of other site owners but don’t think they will be targeted soon.

Previously The Internet Infrastructure Foundation, responsible for operating the .se TLD, said it would consider its options in the event a court order was received. According to the foundation, domain names are not the source of the problem as they are easily traded in for new ones.

“We believe the problem in this type of situation is not the domain, but rather its contents. The domain name itself is not an accomplice in act of copyright infringement and if thepiratebay.se, for example, were to be shut down, the site would almost certainly reopen under another top-level domain,” the group wrote in a blog post recently.

Indeed, if The Pirate Bay domains were seized the site would simply return under a new one within minutes. And TPB is not the only site in this position. As we previously documented the vast majority of all the streaming and file-sharing sites that have been seized over the past two years quickly returned under a new domain name.

However, this doesn’t mean that seizures don’t do damage. Torrent-Finder, for example, lost its .com domain late 2010 and never fully recovered to the same traffic levels the site had before. The loss of Google juice appears to be the main worry in this regard.

The torrent site operators TorrentFreak talked to are not planning to switch domains anytime soon, but all have backup plans in case they become a target. Time will tell whether these are needed or not.