Around for more than a decade, GameMaker is a neat piece of software that gives users the ability to create decent video games without prior game programming knowledge.

In addition to the premium edition, GameMaker is available in a feature-limited free version to entice new users in. Of course, this doesn’t stop the software crackers who regularly release pirated copies of the top-of-the-range product.

YoYo Games, the company behind the software, admit to being in a continuous battle with pirates, trying numerous techniques to mitigate unauthorized downloads. Their latest attempt, however, has completely backfired.

Over the weekend it became clear that Game Maker’s DRM system had gone postal. Indie game developer Brian Heidrich reported that in one of his projects the graphics he had created were now gone, only to be replaced with pirate-related emblems.

“When I opened the project today I was surprised to see skulls on almost all my sprites,” said Heidrich complaining to YoYo Games. 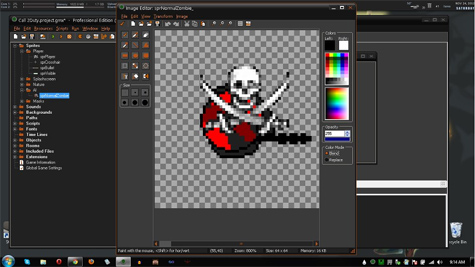 Initially, other members of the GameMaker community found the modification of the game dev’s project amusing and were quick to accuse Heidrich of using a pirated version of the tool.

But quickly it became evident that something was amiss when YoYo’s Head of Development Mike Dailly responded in defense of Heidrich. Dailly, who was the first employee of DMA Design, the company behind Lemmings and the debut Grand Theft Auto, said there might be another explanation.

“Please don’t ASSUME folk are using pirated copies, sometimes a virus or something can effect an exe and gives some issue like this,” he explained.

Whatever the reason, the DRM was definitely causing problems. Not only was the system kicking in on pirated versions of the game, but fully paid-up and even free editions too.

“It certainly appears that GM’s anti-piracy code is registering a false positive and then vandalizing people’s projects,” a user complained on YoYo’s forum. “As much as I’ve been an advocate for GM and YYGs, this is just wrong.”

YoYo has now issued an update to remove this element of the DRM and Dailly has apologized to users affected by the problem.

“I totally understand that those who have paid for GameMaker and are getting this are feeling very upset by the whole matter, and I can only apologize for the problems. We try hard to make it as smooth an experience as possible for paying users, but are constantly fighting pirates’ understanding of the protection systems,” he explained.

“We’d LOVE to be able to remove the protection completely, but we know that vast numbers would simply copy it if it was that easy. A certain number will NEVER buy – EVER! These folks are basically crooks, and you can not count these as lost sales. No matter how ‘cheap’ you make it, some will simply never buy.

“We simply don’t care about them, but if I can piss them off, I will,” Dailly added.

Of course, GameMaker do provide options for users to get in on the fun for free, so they can hardly be criticized for not trying to convert would-be pirates into paying customers. But aggressive DRM is problematic, as summed up by another Game Maker user.

“DRM is, and always will be, a huge failure. It fails to do the one thing it was designed to do, that is stopping piracy,” wrote Big J.

“In addition, it just causes unnecessary trouble for the legitimate users, which is easy to see here.”

The good news is that YoYo not only responded quickly to the issues, but also appear to have taken something positive away from the experience.

“If I thought for one minute we were going to affect customers, I’d never have put [the DRM] in. Something we simply didn’t expect has been happening on end users machines, and while we think we now know, again, I agree, customers should never – ever – be affected by it,” Dailly concludes.