Each month 150-170 million Internet users share files using the BitTorrent protocol, a massive audience by most standards. The common perception is that these people are only interested in obtaining content for free.

However, studies have found that file-sharers are often more engaged than the average consumer, as much was admitted by the RIAA back in 2012. There’s little doubt that within those millions of sharers lie people spending plenty of money on content and entertainment.

To get a closer look, in September BitTorrent Inc. conducted a survey among a sample of its users. In all, 2,500 people responded and now the company has published the results. The figures aren’t broken down into age groups, but BitTorrent Inc. informs TF that BitTorrent users trend towards young and male.

From its survey the company found that 50% of respondents buy music each month, with a sway towards albums rather than singles (44% v 32%). BitTorrent users are reported as 170% more likely to have paid for a digital music download in the past six months than Joe Public.

Citing figures from the RIAA, BitTorrent Inc. says its users are also 8x more likely than the average Internet user to pay for a streaming music service, with 16% of BitTorrent users and 2% of the general public holding such an account.

Perhaps a little unexpectedly, supposedly tech-savvy torrent users are still buying CDs and vinyl, with 45% and 10% respectively reporting a purchase in the past 12 months. BitTorrent Inc. says that the latter represents users “engaging and unpacking art as a multimedia object”, a clear reference to how the company perceives its BitTorrent Bundles.

On average, BitTorrent Inc. says its user base spends $48 a year on music, with 31% spending more than $100 annually. 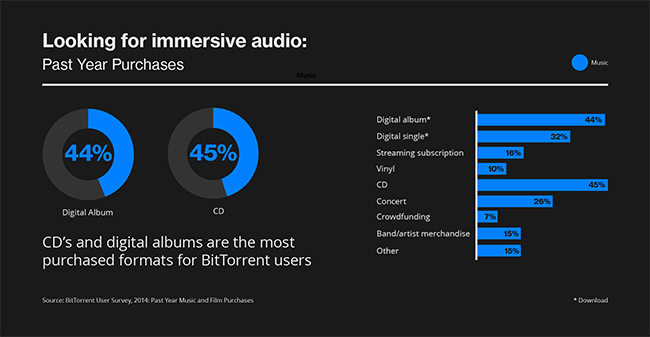 When it comes to movies, 47% of respondents said they’d paid for a theater ticket in the preceding 12 months, up on the 38% who purchased a DVD or Blu-ray disc during the same period.

Users with active movie streaming accounts and those making digital movie purchases tied at 23%, with DVD rental (22%) and digital rental (16%) bringing up the rear.

All told, BitTorrent Inc. says that 52% of respondents buy movies on a monthly basis with the average annual spend amounting to $54. More than a third say they spend in excess of $100.

So do the results of the survey suggest that BitTorrent Inc.’s users have a lot to offer the market and if so, what?

“The results confirm what we knew already, that our users are super fans. They are consumers of content and are eager to reward artists for their work,” Christian Averill, BitTorrent Inc.’s Director of Communications, told TF.

“BitTorrent Bundle was started based on this premise and we have more than 10,000 artists now signed up, with more to come. With 90% of purchase going to the content creators, BitTorrent Bundle is the most artist friendly, direct-to-fan distribution platform on the market.”

It seems likely that promoting and shifting Bundles was a major motivator for BitTorrent Inc. to carry out the survey and by showing that torrent users aren’t shy to part with their cash, more artists like Thom Yorke will hopefully be prepared to engage with BitTorrent Inc.’s fanbase.

Also of note is the way BitTorrent Inc. is trying to position that fanbase or, indeed, how that fanbase has positioned itself. While rock (20%), electronic (15%) and pop (13%) took the top spots in terms of genre popularity among users, 23% described their tastes as a vague “other”. Overall, 61% of respondents described their musical tastes as “eclectic”.

“[Our] users are engaged in the creative community and they have diverse taste. They also do not define themselves by traditional genres. We feel this is a true representation about how fans view themselves universally these days. They are eclectic,” Averill concludes.