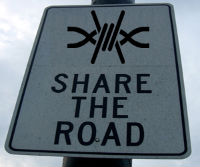 In part due to legal troubles, BitTorrent could, in time, be forced to move away from a centralized approach where torrent files are stored on a central sever, and centralized trackers are used to facilitate communicate between peers.

Last November The Pirate Bay shut down its own trackers, arguing that they have been made redundant by DHT and PEX. At the same time, The Pirate Bay team said that they might move away from torrents entirely and switch to offering Magnet links instead.

These are all interesting developments, but to really decentralize BitTorrent one has to take it up a notch. The way most torrent sites are setup makes them vulnerable to legal action from copyright holders, so the real solution might be to move away from web-based torrent indexes.

A rather primitive way to do this is to share torrents over another file-sharing network, and this is exactly what the Gnutella/BitTorrent client Frostwire has now made possible. Without any public announcement and stuffed away in the changelog of FrostWire’s upcoming release we find the following lines:

Technically speaking these are just minor adjustments to the file-sharing application, but the implications could trigger a revolution in how torrents are shared in the future.

When FrostWire users start downloading a torrent with FrostWire, the client will keep and share the .torrent file on Gnutella. The idea is that as time goes by and more users download more torrents, even if torrent websites are shutdown, all the torrents will live on the P2P network forever.

To make it easier to find torrents on Gnutella, FrostWire also added a specialized “Torrent Search Mode”. As more users install this and later versions – and keep downloading more torrents – the richer these search results will be.

Now FrostWire only needs to offer support for trackerless torrents and they will have completely decentralized the BitTorrent operation with just a few simple adjustments.

Although we believe that FrostWire’s approach is interesting, it will also introduce one major problem. It is relatively easy to make a P2P-powered torrent index, but keeping it clean and malware-free will prove to be very difficult.

Most people might not even be aware of it, but one of the benefits of most torrent sites is that they remove thousands of torrents linking to spam and fake files every day. This will be much harder to do in a P2P-based environment, but not entirely impossible.

Over the last five years the Tribler BitTorrent client has been working on a decentralized torrent index that would make BitTorrent sites obsolete. Unlike simply sharing the torrent files among users, the upcoming release of the Tribler client has built in several spam control and moderation options that allow users to keep the network clean. In addition, newly created torrents can be shared with peers, instead of uploading it to a central server.

We don’t know if FrostWire has plans to implement similar moderation options, but they are absolutely required for a fully decentralized BitTorrent environment.

It will be interesting to see if the idea of a P2P powered and searchable BitTorrent index takes off. For now there are still plenty of good and reliable torrent sites out there, but with continued pressure from the entertainment industry they are not to be taken for granted.

Disclaimer: FrostWire is a TorrentFreak sponsor.