For several years, music rights group BMG has been chasing down pirating BitTorrent users. With help from Rightscorp the company regularly sends DMCA notices to ISPs.

These notices are bundled with settlement demands, intended for Internet subscribers who allegedly shared pirated content. If the accused subscribers pay $30, they avoid further trouble.

However, BMG’s enforcement efforts are not only directed at individual subscribers. Behind the scenes, the company is also putting pressure on ISPs to cooperate with their scheme, or pay up instead.

One of their targets is US-based Internet provider RCN. A relatively small player with roughly 400,000 subscribers, but allegedly good for millions of alleged copyright infringements.

According to BMG, the ISP is liable for the infringements of its users. RCN clearly disagrees with this accusation and went to court earlier this year to ask clarification in the form of a declaratory judgment.

A few days ago the ISP submitted an amended complaint (pdf), revealing a letter that shows how the music licensing group put pressure on them by demanding preventive measures as well as compensation.

“The evidence shows that RCN is allowing repeat infringers to use its network to continue their infringement of BMG works even after RCN has been notified of their specific instances of infringement,” the letter reads. 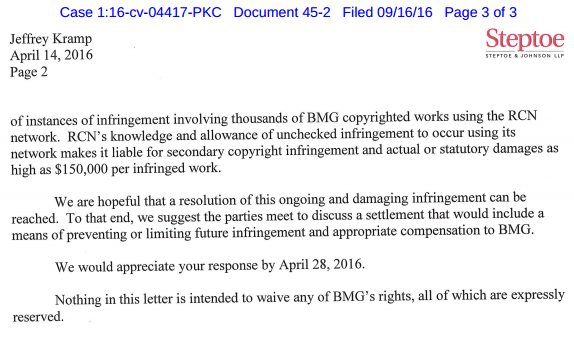 RCN had previously noted that BMG accused the ISP of secondary copyright infringement and the letter shared by RCN late last week shows how.

“RCN’s knowledge and allowance of unchecked infringement to occur using its network makes it liable for secondary copyright infringement and actual or statutory damages as high as $150,000 per infringed work,” BMG’s lawyer writes.

With hundreds of works at stake, the potential damages run to dozens of millions. However, just like the accusations against individual subscribers, RCN can make these go away by signing a settlement agreement and paying compensation.

“We are hopeful that a resolution of this ongoing and damaging infringement can be reached. To that end, we suggest the parties meet to discuss a settlement that would include a means of preventing or limiting future infringement and appropriate compensation to BMG,” the letter suggests.

It’s clear that with this language BMG hoped to pressure the Internet provider into cooperating. This didn’t work out though, as RCN decided to lawyer-up instead and sue them instead.

In the amended complaint, the Internet provider asks for a declaratory judgment that it’s not liable for infringing any of BMG’s copyrights or any damage resulting from alleged infringements of their subscribers.

While ISPs enjoy safe harbor protections under the DMCA, this does not guarantee a positive outcome for RCN.

In a similar liability case last year, Internet provider Cox Communications was held responsible for the copyright infringements of its subscribers. In that case a Virginia federal court ordered Cox to pay BMG $25 million in damages.