A few days ago we wrote about a new website that exposes what people behind an IP-address have downloaded on BitTorrent. The Russian-based founders of the site developed the service so people can show their friends how public their downloading habits are, and that is exactly what we’re going to do today.

Armed with the IP-ranges of major Hollywood studios we decided to find out what they’ve been downloading. As expected, it didn’t take us long before we found BitTorrent ‘pirates’ at several leading entertainment industry companies. Yes, these are the same companies who want to disconnect people from the Internet after they’ve been caught sharing copyrighted material.

First up is Sony Pictures Entertainment. As shown below, on this single IP-address alone a wide variety of music and movies have been downloaded. And this is probably just the tip of the iceberg, as YouHaveDownloaded only tracks only a small percentage of all public BitTorrent downloads.

Downloads from a Sony Pictures IP 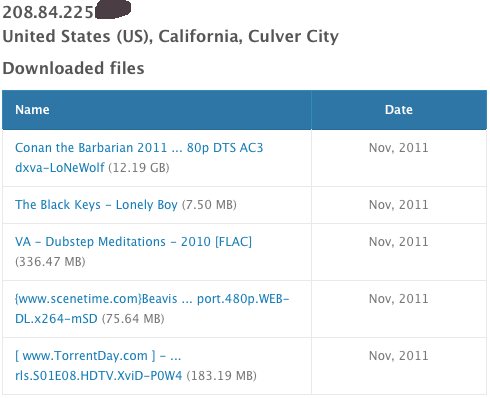 Another Hollywood studio where it’s not uncommon to download music, TV-shows and movies is NBC Universal. The employee(s) behind one of the IP-addresses at the Fort Lauderdale office in Florida downloaded the first season of ‘Game of Thrones,’ some trance music, a DVD of ‘Cowboys and Aliens’, and much more.

Downloads from a NBC Universal IP 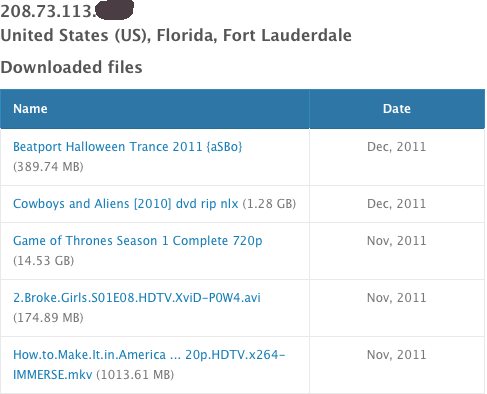 And then there are the fine upstanding people at Fox Entertainment checking out the work of a competing studio. Perhaps downloading ‘Super 8’ can be branded as “market research,” but in this instance actually paying for the DVD might be more appropriate.

After all, when Fox notices that one of their own movies has leaked online they quickly contact the FBI to get the offender jailed. Ouch.

By highlighting the above our intention is not to get anyone into trouble, and for that reason we masked out the end of the IP addresses to avoid a witch hunt. An IP address is not a person, IP addresses can be shared among many people, and anyone can be behind a keyboard at any given time.

Of course our search wasn’t limited only to these big Hollywood studios. We also checked the downloads at the BitTorrent Inc. headquarters in San Francisco. Interestingly there were no downloads recorded there. But there’s plenty of piracy at other tech companies and other institutions.

An IP registered to Google’s Corporate office in New York comes up with a long list of downloads (including a Windows 7 copy), and that’s just one of the many addresses at the search giant. Even at the Church of God the “thou shalt not steal” commandment is less important than getting the latest TV-shows.

We aren’t the only ones to come up with the idea of revealing the BitTorrent habits of copyright advocates. Yesterday, the Dutch blog Geenstijl exposed how someone at the local music royalty collecting agency Buma/Stemra downloaded a copy of the TV-show Entourage and video game Battlefield 3.

In a response Buma/Stemra issued a press release stating that their IP-addresses were spoofed. A very unlikely scenario, but one that will be welcomed by BitTorrent pirates worldwide. In fact, they’d encourage Sony, Universal and Fox to say something similar. After all, if it’s so easy to spoof an IP-address, then accused file-sharers can use this same defense against copyright holders.