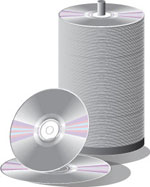 Levies, like them or loathe them, in some countries it’s the law. In Canada they were introduced in 1999, to help offset the alleged losses due to music copying. The theory goes, that as people are copying music tracks onto blank media, then what they are not doing is paying for another copy of that music. That Nirvana track you put onto a compilation CD for your drive to and from work, is another copy that you would otherwise have bought (apparently). So, that loss must be compensated.

For every blank CD sold in Canada, 21¢ used to go to the music industry, to compensate Canadian artists. This has now gone up to 29¢. However, the levy was introduced before the first iPod was sold, and this immediately brings up one of the key problems. The question is: How many of the blank CDs that are sold are used to copy Canadian music onto it? Furthermore, is it fair to ‘tax’ all the other people who buy those CDs for other means?

It seems that the levy is outdated by technology since most private copies are made on MP3 players, not on CDs. With the rise of MP3 players, and the ways to get them connected to audio equipment, blank CDs are becoming less relevant in the audio world. Further, as most computers now come with DVD burners, CDs may be following the floppy as an outdated storage medium. This raised levy might be the beginning of the end for CDs, at least in Canada.

“Two main factors led the Board to raise the CD levy rate to 29¢. First, the mechanical royalties that record labels pay to record a song onto a prerecorded CD have increased. Second, because consumers now use compression technology when they record music, the average number of music tracks copied onto a CD went from 15 to more than 18.”

Unfortunately for Mr. Majeau, the second point is greatly undermined by the fact that, according to the audio CD standard (commonly known as Red Book), CDs shouldn’t be compressed at all. If he was referring to mp3’s, then reducing the average size from 43Mb to 36 (assuming a 650Mb CD) is also unusual.

How fair the levies are is debatable. First, while it claims to be for compensating artists, the Canadian Private Copying Collective (CPCC) FAQ makes it clear that only Canadian performers and record companies qualify for payment. This is a significant blow against non-Canadian artists that don’t have a Canadian representative – the small artist. Worse, the payout of the collected levies is based on radio airplay and retail sales (physical and download). So, a starting Canadian artist that decides to burn 1000 CDs of his demo, he or she is actually paying $290 to established musicians and record labels.

There is also the question of payment. By their own figures, the CPCC had collected almost $242M between 1999 and 2007, of which just under $207M was available for payouts, but only $148.8M had been distributed, leaving $58M or so sitting around, roughly equivalent to the levies collected in 2006 and 2007.

Perhaps most unusually of all though, is that some consumers may be entirely unaware of the levies, let alone their rise. Despite the rise from 21¢ to 29¢ per disc, newegg.ca is selling spindles of 100 for under $20. Considering the levy cost on them is now $29, that’s quite a financial hit. The price of blank CDs may rise soon to compensate, putting them at similar prices to blank DVDs which have no levies. Fortunately for consumers, most DVD players can handle MP3s now. Another great example how technology has advanced since 1999, and also ignored by the Copyright Board.