Following a complaint from three major media companies, Rogers, Bell and TVA, the Court ordered ISPs to block access to domains and IP-addresses of the pirate IPTV service GoldTV.

The blocking injunction sets a new precedent that could have far-reaching consequences. It effectively opens the door to similar blocking requests, which could ultimately target hundreds of sites, as we have seen in other countries around the world.

While most ISPs accepted the order without protest, TekSavvy appealed. This appeal is ongoing and in the meantime, the blockades stay in place. However, that doesn’t mean these are static, as the copyright holders can update domains and IP-addresses when required.

These updates are needed as GoldTV’s presence continues to change. Old domains have stopped working, for example, while new ones have appeared. When these events happen, rightsholders can submit a new request to the court, which has the final say.

The latest update we reported on was in January. In March, another request came in, but the Court didn’t approve that due to the COVID-19 shutdown. This prompted Bell and Rogers to submit another proposed update, which was granted by the Federal Court last week.

The new blocklist update is backed up by a detailed affidavit from Yves Rémillard, who works as an investigator for BCE, which is owned by Bell Media. Rémillard is part of the in-house antipiracy team that keeps an eye on GoldTV’s business, including its resellers.

BCE is able to monitor changes because it purchased access to a GoldTV “reseller control panel.” When one of the old domains stopped working, the undercover investigator reached out to a reseller, who shared the new alternative via Whatsapp. 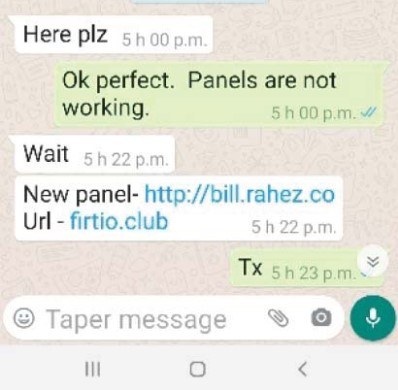 The investigator then researched these and related domains to see if they could indeed be used to access GoldTV’s services. When that is believed to be the case, they are added to the blocklist. Currently, that’s true for destv.me, three rahez.co subdomains, and global.myiptvplanet.com. 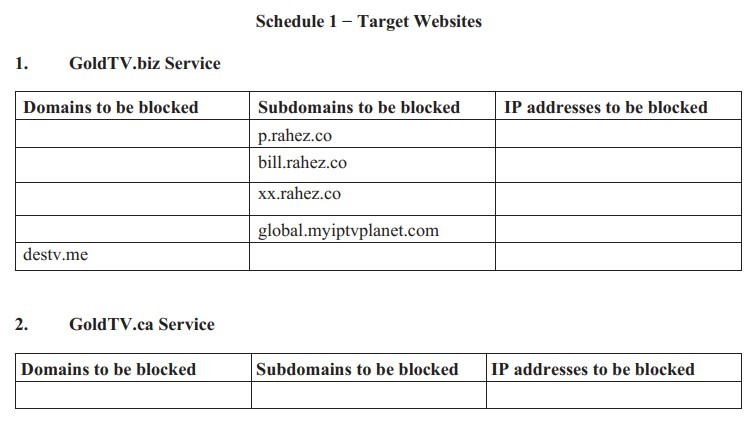 These domains now make up the entire blocklist. All IP-addresses and domain names that were present in the original order have been removed, as is shown in the partial overview below. The same is true for IP-addresses and several domains that were in the March blocklist request (pdf).

Andy Kaplan-Myrth, TekSavvy’s vice-president of regulatory affairs, confirms that the ISP has received the new blocking demands. He announced the new requirements on Twitter as well and stressed that the company will comply with the order.

“The media companies now regularly ask the court to change the list of blocked sites. Today, July 10, 2020, the Federal Court issued an updated order removing blocks on almost all of the domains and adding a short list of new ones. #ShipOfTheseus TekSavvy continues our appeal,” Kaplan-Myrth noted.

As was the case previously, the copyright holders’ law firm asked the ISPs not to publish the domains before the court order was granted.

Based on the affidavit, the blocklist expansion is well documented and researched. However, Kaplan-Myrth’s reference to the “Ship Of Theseus” thought experiment is intriguing. Is this still the same blocking order now that all original domains and IP-addresses have been removed?

While that question can be debated, the goal still remains the same. That is, blocking access to the GoldTV service, which still is a moving target.

Another issue worth highlighting is that while rightsholders can add new domains and IP-addresses, they require explicit approval from the court. This is different from the process in several other countries where blocklists can be expanded without court oversight.

This extra layer of oversight makes the blocklist less error-prone. However, it also slows down the process. It can take weeks before the court approves a blocklist extension, and by then, GoldTV and its resellers may have already relocated again.

The affidavit from BCE’s anti-piracy investigator Yves Rémillard is available here (pdf) and a copy of the latest blocking order can be found here (pdf).