In January, a coalition of Canadian companies called on the country’s telecom regulator CRTC to establish a local pirate site blocking program, which would be the first of its kind in North America.

The Canadian deal is supported by Fairplay Canada, a coalition of both copyright holders and major players in the telco industry, such as Bell and Rogers, which also have media companies of their own.

Before making a decision on the proposal, the CTRC has launched a public consultation asking Canadians for their opinion on the matter. In recent weeks this has resulted in thousands of submissions, with the majority coming from ordinary citizens.

The responses themselves range from an unequivocal “another push by Bell to control all forms of communication,” to very elaborate and rather well-documented arguments.

From the responses we’ve seen it’s clear that many individuals are worried that their Internet access will be censored. The term “slippery slope” is regularly mentioned, as well as the corporate interests that back the plan.

“I strongly oppose any attempt for internet censorship, especially any attempt brought forth by a commercial entity. The internet is and should remain a free flowing source of information that is not controlled by any individuals or groups political or corporate interests,” Shanon Durst writes in her comment.

“If there is concern for illegal activities taking place on the internet then those activities can be addressed in a court of law and the appropriate actions taken there,” she adds.

The same type of arguments also come back in the Electronic Frontier Foundation’s (EFF) submission.

“It is unsurprising that the entertainment industry would rather construct its own private body to bypass the court system in making decisions about website blocking,” the EFF writes.

“But if it is allowed to do this, will the newspaper industry be next to propose and fund a private body to make determinations about defamation? Will the adult entertainment industry propose establishing its own private court to determine the boundaries of the law of obscenity?”

While they appear to be in the minority, there are several commenters who back the proposal. Where most individual responses oppose the plans, it appears that many submissions from organizations are in favor.

A lot of these responses come from outfits that are concerned that piracy is negatively impacting their livelihoods, including Canada Basketball, The Association of Canadian Publishers, and Pier 21 Films.

“Canada’s current tools to combat piracy are not working. The FairPlay proposal is a proportionate response that reflects the modern realities of piracy,” Laszlo Barna, president of Pier 21 Films writes.

“As participants in the legal sports and entertainment market in Canada, this proposal will reduce the theft of content and support the ability to invest in, produce, and distribute the great content that our fans crave,” Canada Basketball concurs.

Drawing conclusions based on this limited sample of comments is hard, aside from the finding that it will be impossible to please everyone. Thankfully, research conducted by Reza Rajabiun and Fenwick McKelvey, with support from the Social Sciences and Humanities Research Council of Canada, provides additional insight.

The visualization below gives an overview of the most statistically significant concepts emphasized by respondents in their submissions, as well as the relationship among these concepts. 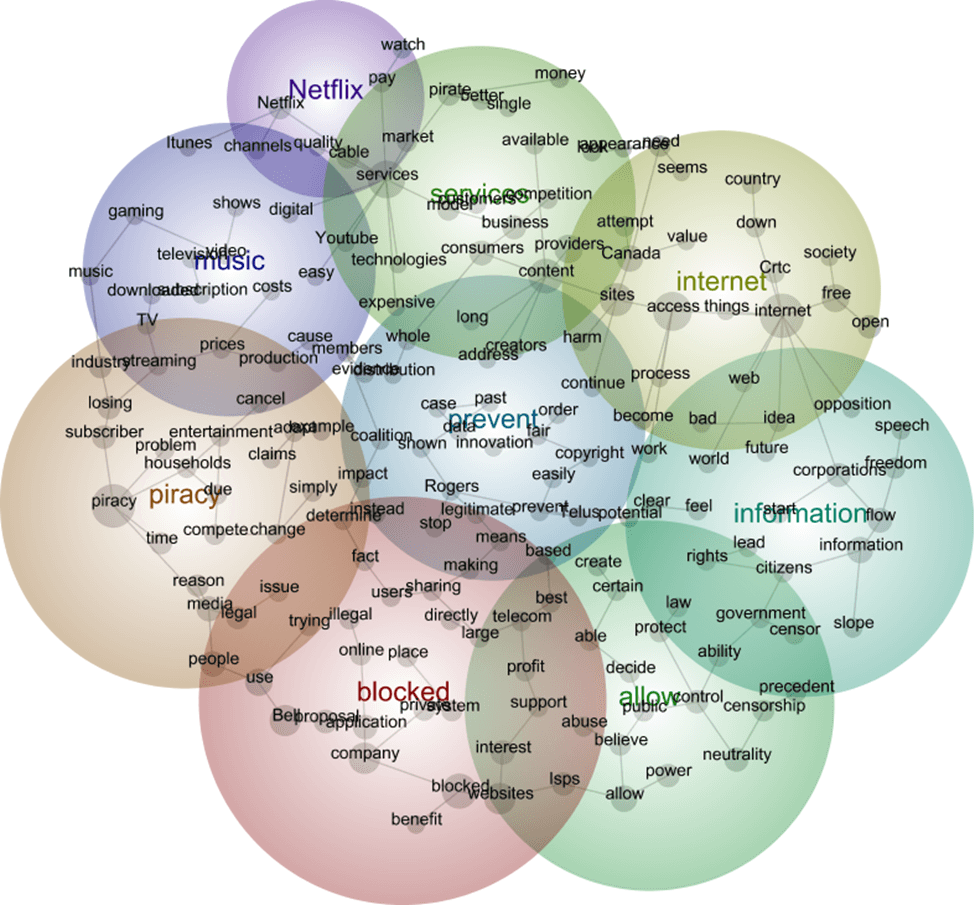 The quantitative content analysis is based on 4,000 submissions. While it requires some interpretation from the reader, many of the themes appear to be closely aligned with the opposition, the researchers write.

“According to their CRTC submissions, Canadians believe that the proposal is a ‘bad’ ‘idea’ because it enables ‘corporations’ and the ‘government’ to restrict ‘freedom’ of ‘speech’ and ‘flow’ of ‘information’ among ‘citizens.’ The fear of setting a bad ‘precedent’ is closely associated with the potential for ‘censorship’ in the future.”

Many of the same words can also be in a different context, of course, but the researchers see the themes as evidence that many members of the public are concerned about the negative consequences.

“Overall, it is easy to see that Canadians tend to view the proposed blocking regime not just in terms of its benefits for fighting ‘piracy’; they also perceive that setting up a national blocking regime may be a threat to their economic interests as ‘consumers’ of ‘legitimate’ ‘media’ and of their political ‘rights’ as ‘citizens’,” they write.

At the time of writing nearly 8,000 responses have been submitted. There is no easy way to determine what percentage is for or against the proposal. When the deadline passes on March 29, CRTC will review them manually.

When that’s done, it is up to the telecoms regulator to factor the different opinions into its final decision, which won’t be an easy feat.