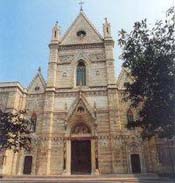 The sacristan of the Duomo di Napoli, referred to as S.V. by the Italian police, is believed to be the head of a criminal network of 11 members. The man, and also his son, are held responsible for downloading most of the pirated material that was distributed by the network.

The police confiscated 14,000 CDs and DVDs containing pirated movies and music along with 143 burners, 222,000 jewel boxes and 40,000 inlay cards. The alleged pirates, including the sacristan and his son, are facing several years behind bars.

Pope Benedict XVI was not available to comment, and although the Catholic Church has a habit of promoting reproduction, it does not approve of Piracy.

In 2003 God himself had some issues with Reverend Alfred Jackson, a minister at the church of St. Cecilia in Kansas City, because he was “spreading the word”. Back then God said that ‘spreading the Gospel’ was not a valid defense for distributing copyrighted materials.”