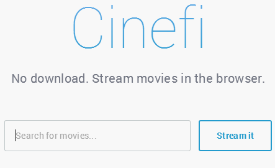 A few weeks ago a new piece of software called “Popcorn Time” made headlines around the world.

Using only HTML5 technology, Cinefi can stream video torrents directly to a browser. There is no need to install any software or plugins and it works on every platform. This is not limited to PCs and laptops either, since it also includes mobile devices and game consoles.

TorrentFreak caught up with the main developer Rich, who says that the main motivation to develop the service was to see if it was possible to make a torrent streaming tool without any additions.

“We started the project for the sheer challenge of seeing if we could stream torrents directly to the browser without any other software,” Rick explains to TF.

The result is a web service that looks awfully simple, but works as advertised. Similar to Popcorn Time, it taps into a database of YTS movies, but users can also stream other videos by pasting a magnet link into the search box.

“Right now you can search for movies, which come from YTS, but Cinefi will play any torrent or magnet link, except videos encoded in AVI. Just paste and click,” Rich says.

As can be seen below, a trailer of the fourth Game of Thrones season plays just fine after a few seconds of loading time. As with any torrent streaming service, the playback is the smoothest for files that have relatively many seeders. 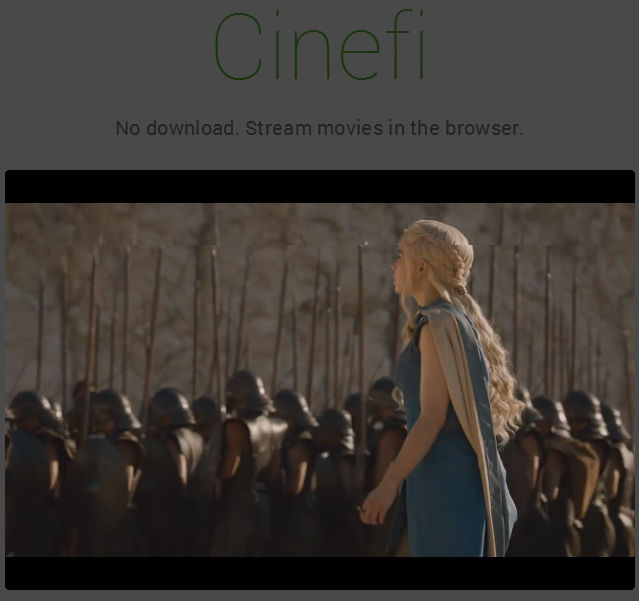 Cinefi is closed source and uses a “patent-pending technology” which blends several HTML5 technologies. According to the developer, this makes it the first torrent streaming service of its kind, and since it doesn’t depend on extra software, it can be used by pretty much anyone, anywhere.

Of course, the entertainment industries are not going to cheer on this development, but the technology itself isn’t infringing on any copyrights according to the Cinefi team. In fact, they advise people not to use the service in any way that might break the law.

“As stated on the site, the site is legal to use, but downloading illegal torrents isn’t. We don’t encourage any illegal activity on the site. We do not host or store any torrents,” Rich tells TF.

“We merely provide the technology and it is up to the user’s discretion,” he adds.

Those who are interested can head over to Cinefi.com and take the service for a spin, with this torrent for example. It’s free to use, and will remain so for the foreseeable future.

Update: Cinefi has shut down.

“Dear Friends: We thank you for the overwhelming response to our service. Unforunately we have to stop the service for now. Stay tuned for an exciting new development!” a message on the site reads.