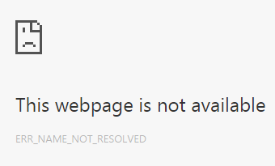 Last May, Grooveshark shut down after settling with the RIAA. However, within days a new site was launched aiming to take its place.

The RIAA wasn’t happy with this development and quickly obtained an injunction, preventing various Internet service providers from offering their services to the site.

Through the lawsuit the companies hope to prevent further copyright infringements, but there is more at stake. Much more.

The case is also the first major test of how receptive the courts are to the notion of injunctions against hosting companies, domain name services, ISPs and search engines.

Fearing that these attempts may become commonplace several tech companies protested the injunction, including CloudFlare. The court order requires the CDN-service to ban all domain names that use the term “Grooveshark,” which the company believes is too broad.

This week CloudFlare informed the court that the order limits free-speech, impacting legitimate customers who use it for perfectly legitimate websites.

“CloudFlare has already been compelled by the injunction to deny service to at least one website that is plainly non-infringing, and to others that are arguably non-infringing and have no discernible connection with the Defendants in this case,” they write (pdf).

“This harm to CloudFlare’s business and potentially to customer’s businesses, and to the free speech rights of its customers, will continue without a modification of the Preliminary Injunction.”

As an example, CloudFlare says it had to terminate the account of “groovesharkcensorship.cf,” a site which protested the broad injunction as the screenshot below shows.

Groovesharkcensorship.cf, before CloudFlare took it offline 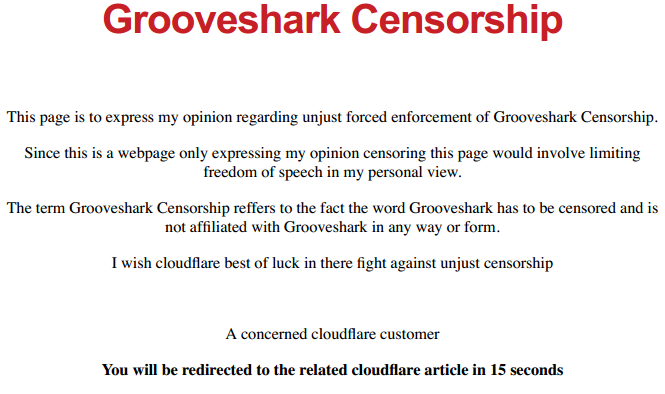 Under the injunction CloudFlare had no other option than to disable its services for the domain, rendering it inaccessible.

In an email, the company informed the affected user about its actions explaining that it’s not allowed to provide any services that use the Grooveshark trademark in a domain name. 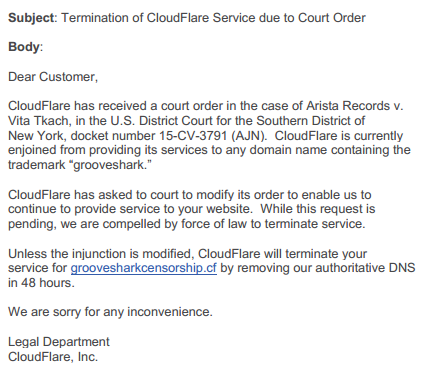 According to CloudFlare many other legitimate sites may be at risk of being censored if the broad injunction is upheld.

Despite these protests, the record labels maintain the position that the measures are “entirely appropriate.” They argue that it’s up to CloudFlare to determine whether a domain name is infringing, and consult the record labels if there’s any doubt.

For its part, CloudFlare wants the court to modify the injunction so that they only have to target domain names which the record labels point out to them, instead of banning the word Grooveshark altogether.

Shortly before publishing this article the court ruled (pdf) on the dispute, largely in favor of CloudFlare.

In a ruling issued a few hours ago District Court Judge Alison Nathan clarifies that CloudFlare is no longer required to ban all Grooveshark-related domains. Instead, the record labels must alert the company to possibly infringing sites.

However, Judge Nathan adds that if CloudFlare has knowledge of an infringing domain name it is required to take action on its own.

So, in the end it appears that the censored anti-censorship site has served its purpose. At the time of writing it still remains offline, but this may change during the coming hours.