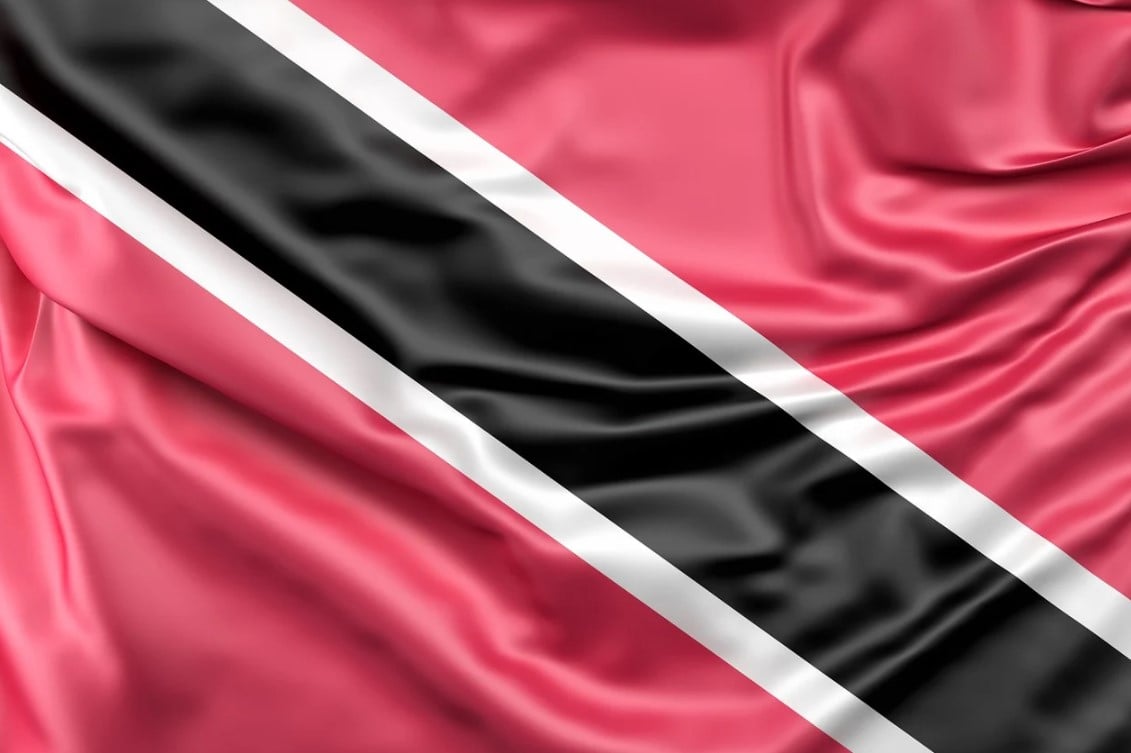 In recent years, legal video streaming services such as Netflix and Amazon have flourished.

At the same time, millions of people are streaming from unauthorized sources as well, often paired with perfectly legal streaming platforms and devices.

This mix of legal devices and illegal addons is a challenge for law enforcement. Platforms such as Kodi, Plex, and Roku are perfectly legal but can be configured to access pirate content. The same is true for Amazon’s Firestick, Android streaming boxes, or pretty much every smartphone.

Because devices can be used for both legal and illegal purposes, it’s important to clearly communicate what is allowed, and what isn’t. This is where Trinidad & Tobago’s Telecommunications Authority and Intellectual Property Office slipped up yesterday.

The Government organizations of the Caribbean island issued a stark warning against the sale and use of ‘illegal streaming devices.’ Those who break the law risk a maximum fine of $250,000 as well as a prison sentence of up to ten years, they warned.

However, the message isn’t well-received by the intended audience. According to hundreds of responses on social media, it’s not clear at all what an illegal streaming device is.

The definition provided in the Telecommunications Authority’s official press release is indeed quite broad.

“Illegal streaming devices are small media boxes, USB sticks or other devices which are connected to your television and contain software that allow access to television stations, movies, sports channels and other copyrighted content without paying the applicable price or subscription,” it reads. 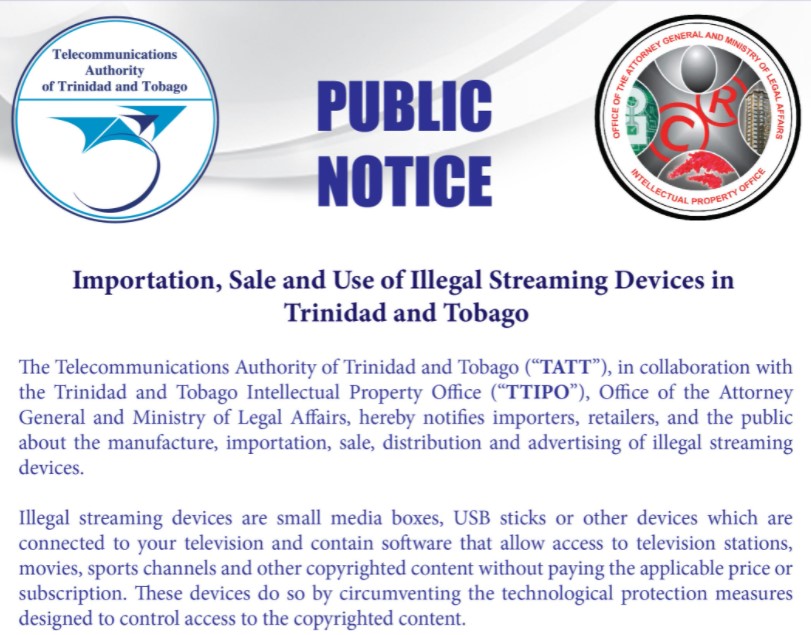 Instead of clarifying that illegal streaming is not allowed, the notice created massive uncertainty. Depending on how the warning is read, pretty every media device with a connection to the Internet could fit this description. As such, many people feared that Firesticks, Smart TVs, and other tools are outlawed as well.

Shortly after the warning was issued, hundreds of comments poured in on social media with people asking for clarifications.

There is a need to clarify the importation of legally compliant streaming devices, this notice is too generic and is not fair to the average Jo who wants to bring in a device to use compliant apps, am I to take this as an intent to charge me for bringing in the new chromecast or firestick for my parents who don’t have a smart tv? – Dayne Ramtahal

Another commenter went even further, suggesting the Government should retract its message because it’s too broad.

Please retract and revisit this legislation. It is too broad and as it is written technically targets all computer devices. As these so called illegal streaming boxes are essentially computers. – Adam Mongroo

These two highlighted comments are just the tip of the iceberg. Below is a selection of some common responses, which are pretty much all negative. What stands out is that the public seems to be much better informed about the technical aspects than the Government itself. 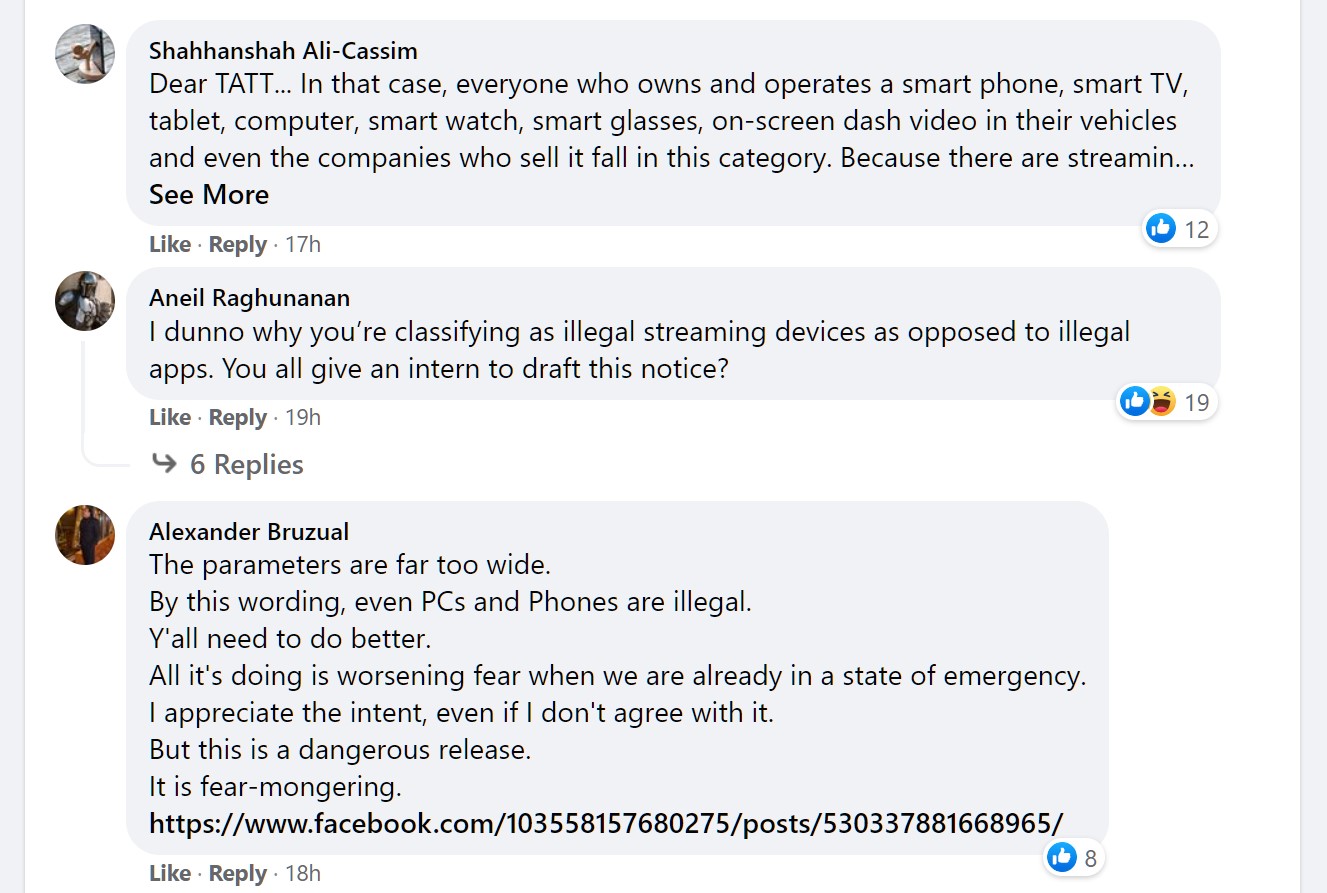 What a silly post. By virtue of this, I guess they should be seizing PCs and phones too. – Kamlesh Ramcharitar

Why say the boxes are illegal and then say you can still use it to stream Netflix etc? Be CLEAR in your press release. – Keisha Dyer

This is the dumbest release I’ve read in a while. This is literally fearmongering as you’ve placed no guidelines into what can constitute illegal devices. By this broad-arm approach a PC is an illegal device do better. – Alexander Ramon

A cell phone is an illegal device now ??? It fits the description if you look at it. – Mich Deosingh

I dunno why you’re classifying as illegal streaming devices as opposed to illegal apps. You all give an intern to draft this notice? – Aneil Raghunanan

The parameters are far too wide. By this wording, even PCs and Phones are illegal. Y’all need to do better. All it’s doing is worsening fear when we are already in a state of emergency. – Alexander Bruzual

Perhaps surprised by this massive response, the Telecommunications Authority of Trinidad and Tobago (TATT) was quick to clarify that people can still use Firesticks and Smart TV to watch YouTube and Netflix. But it stressed that using these devices to stream content illegally is not allowed.

Firesticks Can be Used Illegally…

“However, the use of these devices – Amazon FireStick, smart TV, tablet, phone, etc. – to download apps and access content such as TV shows, sports events, movies, etc. illegally without paying for that content is a breach of the Copyright Act,” TATT clarified.

We assume that the original press release was supposed to signal that using or selling devices with pre-loaded piracy apps is not allowed. However, as the comments show, that wasn’t communicated clearly.

It’s unclear why the Government decided to issue this warning now. Interestingly, it comes less than a month after the US Trade Representative called out Trinidad and Tobago in its 2021 Special 301 Report. This is a watchlist of countries that should do more to protect US copyright holders.

Among other things, the USTR’s report encouraged Trinidad and Tobago to do more to stop online piracy.