Convicted Music Pirate Refuses to Work For The RIAA 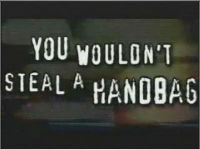 During the last decade the RIAA targeted about 35,000 people in their file-sharing lawsuits and Jammie Thomas is one of their most famous defendants.

The case is best known for being the first major file-sharing case in the US concerning the P2P activity of a regular user and the vast swings in damages awarded over multiple court hearings.

Even the Obama administration got involved earlier this year, arguing that the Supreme Court should not reduce the $222,000 fine as that would be an encouragement to other music pirates.

The Supreme Court listened and eventually refused to review the case.

The end result is that Thomas now owes the RIAA more money than she can pay, and she’s even considering filing for bankruptcy to avoid paying anything. However, the RIAA sees another opportunity.

Wired reports that the anti-piracy group has offered to reduce Thomas’s fine if she agrees to “work” for them campaigning against piracy. While the RIAA probably has the best intentions, for someone who fought legal battles against the music group for nearly a decade, the gesture probably feels like a slap in the face.

And indeed, Thomas has resolutely refused the offer. “I’m not doing it,” she said.

According to Thomas’s lawyer the RIAA hasn’t yet put a number on the discount, but it was made clear that she wouldn’t have to pay the full amount. This wasn’t the first offer either, previously Thomas was given the opportunity to settle the case in exchange for a donation to a music charity.

Commenting on the issue, the RIAA maintains that its intention is to resolve the manner in a “reasonable way,” minimizing harm for all involved.

“We have communicated to Ms. Thomas that we would consider a variety of non-monetary settlement options, which is up to her to offer. We think this is a gesture of a good will and we’re doing what we can to resolve this case in a manner that works for everyone,” an RIAA spokesman says.

The only way for Thomas to escape paying is by her going bankrupt, although that would mean that everyone involved in the case ends up losing. Except the lawyers.