Copyright Troll Drops Lawsuits When it Gets the ‘Wrong’ Judge

In the United States, federal courts are still being swamped with lawsuits against alleged BitTorrent pirates.

While copyright holders avoid some unfavorable jurisdictions, these companies are a common sight in others, such as Southern Florida.

Over the past year or so, adult entertainment company Strike 3 Holdings has filed dozens of lawsuits in this district. While that’s nothing new, there are some lawsuits that stand out.

In a few instances, Strike 3 dropped their complaints within a day or two, right after the judge was assigned. When we took a closer look, we found out that in each of these cases the same judge is listed: U.S. District Judge Ursula Ungaro.

Judge Ungaro is a familiar name to those who’ve been following these types of piracy lawsuits over the years. More than half a decade ago she issued an order stating that an IP-address doesn’t necessarily identify a person.

Over the years Judge Ungaro remained very skeptical. Among other things, she is not convinced that IP-address geolocation tools are good enough to prove that a person actually resides within the court’s jurisdiction.

This also came up again last year. When Strike 3 applied for a subpoena to identify a person behind an IP-address, the Judge denied the request for this very reason.

“There is nothing that links the IP address location to the identity of the person actually downloading and viewing Plaintiff’s videos, and establishing whether that person lives in this district,” Judge Ungaro reiterated.

With this in mind, one can understand why Strike 3 isn’t too fond of Judge Ungaro. This may also explain why it chooses to simply drop cases as soon as this particular judge is assigned. This is exactly what happened twice in August last year. 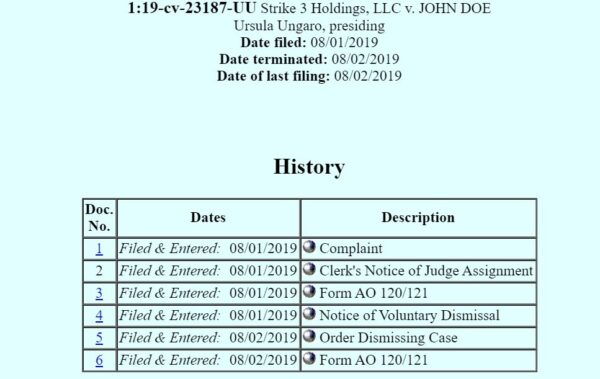 In other cases, Judge Ungaro submitted a ‘sua sponte’ motion within a day, asking Strike 3 to provide more evidence before it could even request a subpoena. That happened again this week.

Immediately after a new case was filed, the Judge requested more evidence concerning geolocation accuracy as well as any link between the IP-address and the alleged pirate.

“[T]his Court requires a showing of the precise methodology and technique employed by Plaintiff in its use of geolocation to establish — to a reasonable degree of certainty — that Defendant may be found within this district,” Judge Ungaro wrote.

Strike 3 obviously wasn’t happy with this swift response from the Judge. When it spotted the request the case was immediately dismissed. Perhaps the company acted a bit too quickly, as it submitted the dismissal request before replying to the court’s motion, as is required.

The rightsholder noticed this error and submitted its standard response, apologizing for “the confusion.”

Strike 3 didn’t even bother to wait for Judge Ungaro’s response to its reply, however. The end result was that two days after the new case was filed, it had already been dismissed.

With the dismissal granted, the defendant escaped being exposed. That wasn’t the first time either because the same IP-address was among those that were previously targeted in a county court, where the defendant objected to having his or her personal details exposed.

We have no indication that the same person will be targeted again. Since the company has thousands of allegedly-infringing IP-addresses on file it can simply ‘try again’ with the next target, until it gets a more favorable judge.

While Strike 3’s actions may be understandable, some people, and perhaps some courts, may frown upon it.

TorrentFreak spoke to Florida-based attorney Cynthia Conlin who has represented several defendants in these ‘trolling’ lawsuits. She believes that Strike 3 is “Judge Shopping” and may point this out in court.

Although the company may technically color between the lines, Conlin believes that Strike 3 is acting in bad faith, and she hopes that the court will eventually draw the same conclusion.