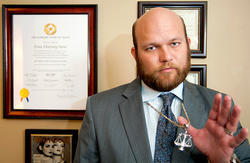 However, events took a turn for the strange.

Soon both EFF and Public Citizen, who had been appointed by a judge to act in the Does’ interests, learned that at least one ISP had already been handing their subscribers’ identities over to Stone. It transpired that Stone had been issuing subpoenas to ISPs without the court’s permission.

“To summarize the staggering chutzpah involved in this case: Stone asked the Court to authorize sending subpoenas to the ISPs. The Court said ‘not yet.’ Stone sent the subpoenas anyway,” Judge Godbey wrote.

“The Court appointed the Ad Litems [EFF and Public Citizen] to argue whether Stone could send the subpoenas. Stone argued that the Court should allow him to – even though he had already done so – and eventually dismissed the case ostensibly because the Court was taking too long to make a decision.”

All along Stone had been receiving information from ISPs and had even contacted some of the 670 Does with letters seeking cash settlement for their alleged infringements.

“Because Stone obtained information that he had no right to receive, the subpoenas falsity transformed the access of the Does’ information from a bona fide state-sanctioned inspection into private snooping. The Court rarely has encountered a more textbook example of conduct deserving of sanctions,” he added.

But true to form Stone would not be giving in, informing Ars Technica: “After three rewrites, I finally decided I’m just going to have to let Justin Bieber do my quoting for me: ‘Whenever you knock me down I will not stay on the ground.'”

Inevitably Stone appealed, and yesterday the Fifth Circuit Court of Appeals handed down its ruling. For everyone involved, Stone excepted, it was worth the wait.

On appeal Stone presented a number of arguments but the court noted that “none of these arguments, thus, was preserved for purposes of appeal, nor does Stone contend they were. Accordingly, all the issues Stone raises on appeal have been waived.”

And in a clear indication that the courts are becoming wise to the tactics of Stone and others like him, came the following statement.

“Stone committed those violations as an attempt to repeat his strategy of suing anonymous internet users for allegedly downloading pornography illegally, using the powers of the court to find their identity, then shaming or intimidating them into settling for thousands of dollars, a tactic that he has employed all across the state and that has been replicated by others across the country,” the Judges wrote in their ruling.

“The stay of sanctions is therefore VACATED, and any sanctions imposed
by the district court are AFFIRMED.”

Stone was hit with a $10,000 fine and ordered to pay the costs of the EFF and Public Citizen. Other sanctions compel him to inform all clients and judges he currently has cases with about this ruling against him. Reputation-wise, this kind of hit will be hard to recover from.

Finally, since Stone struggled with his quotes before, feel free to help him out by adding any appropriate Justin Bieber lyrics in the comments below.