Every year billions of citizens help to develop the Internet by adding their own content, whether that’s substantial works such as videos, music or articles, or smaller but nevertheless important comments or snippets of information.

Inevitably, however, some of these postings can infringe other people’s copyrights, resulting in rightsholders and anti-piracy companies issuing DMCA takedown notices to have them removed. The sting in the tail for many users, however, is that if they continually receive DMCA notices against their accounts on sites like YouTube, Twitch or Twitter, their accounts can be put in peril.

Repeat Infringer Policies Can Be Selective

Indeed, large numbers of users of these platforms alone have been permanently banned under so-called repeat infringer policies, where they are essentially told they’re no longer a responsible member of the community and must be banned. The reason, of course, is that the platforms themselves don’t want to be held liable should rightsholders decide to file what could be a massive copyright lawsuit.

Interestingly, however, the old adage of “there’s one rule for them and another for us” is alive and well, particularly on Twitter and especially in respect of President Trump, who – despite receiving a stream of copyright complaints against his account – has managed to avoid a ban from Twitter. But after receiving yet another DMCA complaint this week, an interesting question raises its head.

It is not uncommon for Donald Trump’s tweets to be either hidden by Twitter (when the platform believes the tweet carries an untruth, for example) or completely removed due to a copyright complaint. It has happened on many occasions in the past, largely due to allegations of him or his staff posting music in breach of copyright. And on December 28, it happened yet again.

The content in question was a campaign-style video that celebrated the claimed accomplishments of the Trump administration. However, like many similar videos posted to Twitter in the past by Trump, it contained copyrighted music. In this case the track Hoedown by the late composer Aaron Copland.

A few hours ago the DMCA notice in question was submitted by Twitter to the Lumen Database, which published the details in its archives. Three separate notices were filed targeting the same content but the one shown below carries the most detail. 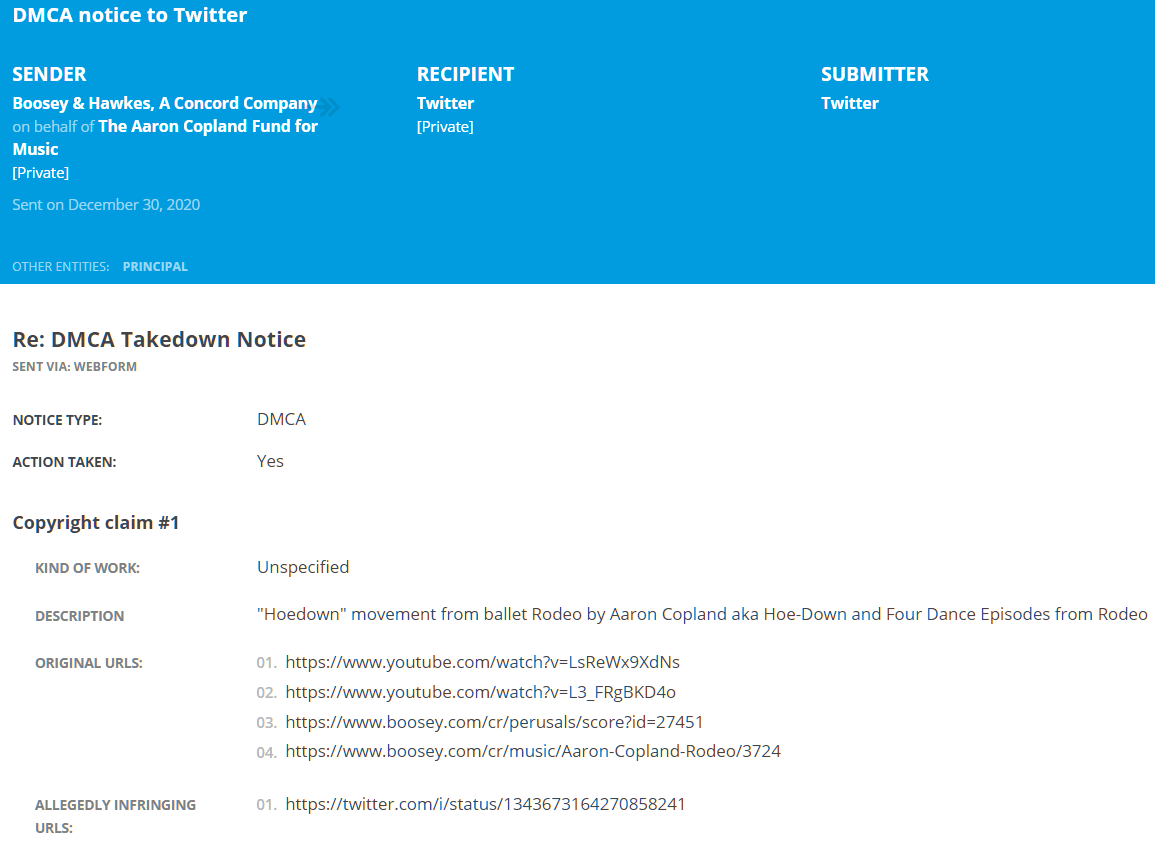 Of course, had this been the umpteenth time that a regular user had received a DMCA complaint, their Twitter account would’ve been toast. Instead, however, it appears that Twitter has once again invoked its ‘world leader policy‘ which allows people like Trump to do things that would end in mere mortals being banned from the platform.

There are limits to what even ‘world leaders’ can do to avoid getting nuked from Twitter but thus far, Trump has managed to avoid the banhammer. The big question now is for how long.

At noon on January 20, 2021, the presidency of Donald Trump will come to an end. No one will ever be able to remove his historic status as the 45th President of the United States but he will no longer be a world leader. As a result, on the same day (and as long as the company sticks to its own policies) Twitter will have to start treating the former president as plain old Donald Trump.

This raises many questions, some of them of great significance.

Strictly in terms of DMCA notices, President Trump already has way more than it would take for an ordinary citizen to get themselves banned from Twitter. On January 20, when he becomes ‘ordinary’ again, will those ‘strikes’ be consigned to the history books with no further action? That not only seems the most likely outcome but perhaps the most sensible too.

Whatever one thinks of Trump’s presidency, records of his actions while in power are significant moments in time that simply do not warrant being erased from history. However, there are complications here too.

When Trump became president, he refused to give up his personal account, so @realdonaldtrump effectively became the presidential account. On January 20, however, that account will no longer be in the hands of a world leader, meaning that no more free passes should be available from Twitter.

This means that starting then, if Twitter levels the playing field as it should, three more strikes and Donald Trump’s account should be done, just like anyone else’s would be.

So Twitter is going to be left with a dilemma, should Donald Trump decide to continue posting stuff that results in DMCA notices. If the company keeps giving Trump the ability to sidestep copyright law, it could be held responsible for not terminating the account of a known repeat infringer. However, if it bans his account, all of the tweets from his presidency will disappear with it.

Clearly and for the sake of history, that can’t happen. However, the law is the law so if any copyright holders decide to get fired up, Twitter could find potentially itself in an interesting legal position. Of course, there’s always the chance that no more infringements or alleged infringements will occur, effectively solving the problem for them.

Only time will tell which way things go but at the very least, popcorn should be kept on standby in the new year. If only to see how many more notices will come in before the protective shield is taken away.