Last year LANVA reported the IP-addresses of 106 users of the country’s largest BitTorrent site to the police. The anti-piracy group claimed that the site’s users were sharing a copy of the Windows 7 Ultimate operating system and took action on behalf of Microsoft without notifying the software company.

The self-proclaimed investigators evidence consisted of a screenshot of peers as listed by uTorrent. The evidence was gathered in conjunction with a local police officer, but none of the parties involved was authorized to conduct an investigation of this kind.

LANVA nevertheless took one of the 106 users to court, hoping to set a favorable precedent that would allow them to go after other alleged copyright infringers. The case went before the courts and the verdict handed down today was not the one the anti-piracy outfit had hoped for.

Citing faulty evidence, the District Court judge closed the case and fully acquitted the sole defendant Sergej Bernotas. The judge stated that LANVA had no right to collect and use the information they gathered. In addition, the judge ruled that such evidence gathering techniques have to be approved before they can be used.

Sergej Bernotas Came Out As a Winner 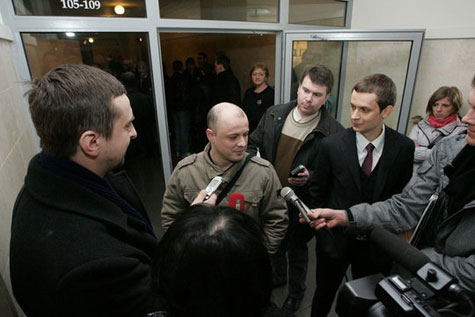 For now, uTorrent and for that matter all other BitTorrent clients remain uncertified as proper evidence collection tools. To be used as such, the developers would also have to give their approval, something that obviously didn’t happen in this case.

At the court hearing it also became clear that the police officer involved had no IT experience and simply carried out what LANVA told him to. When the policeman was asked what tools he used to gather evidence he replied “a computer” resulting in laughs from the audience.

Aside from the action against several LinkoManija users, the alleged operator of the site is also facing legal action from LANVA and Microsoft. In January software giant Microsoft sued the alleged operator, demanding $43 million from the defendant and his company for assisting in the illegal distribution of Office 2003 and 2007.

The case against the operator is still ongoing, but today’s ruling makes it unlikely that LANVA will be successful in pursuing the site’s users. The anti-piracy outfit does have the option to appeal, but if they do the case won’t be heard before the coming winter.