According to the labels, the Internet provider knew that some of its subscribers were frequently distributing copyrighted material, but failed to take any meaningful action in response.

Grande refuted the accusations and filed a motion to dismiss the case. The ISP partially succeeded as the claims against its management company Patriot were dropped.

In addition, the vicarious infringement allegations were also dismissed. The court saw no evidence that potential customers would specifically sign up with Grande because it did not police infringing conduct by its subscribers.

The labels disagreed, however, and tried to convince the court otherwise. In May they submitted a motion for leave to file an amended complaint including new evidence obtained during discovery. Among other things, they argued that Grande willingly kept pirating subscribers aboard, to generate more revenue.

Yesterday, US District Court Judge Lee Yeakel denied the record label’s request to file an amended complaint. He agrees with the earlier recommendation from the Magistrate Judge, who saw no new evidence which shows that ‘pirate’ subscribers were specifically drawn to Grande.

“Second, the new allegations still fail to say anything about the motivations of Grande’s subscribers when they sign up with Grande. That is, Plaintiffs still fail to plead facts showing Grande gained or lost customers because of its failure to terminate infringers.”

The record labels didn’t agree with this recommendation and filed their objections two weeks ago, noting that their claims are more than sufficient. The Magistrate’s report and recommendation lack legal grounds and overlooks important elements, they claim.

“[T]he Report effectively ignores Plaintiffs’ other ground to satisfy the financial benefit element: that Grande profits from known repeat infringing customers to whom it provides ongoing internet service, even despite receiving notice of their infringing conduct,” the labels wrote.

Faced with this objection, District Court Judge Yeakel reviewed the case once more. Yesterday, he concluded that the Magistrate Judge was right, adopting the recommendations in full.

“In light of the objections, the court has undertaken a de novo review of the entire case file. Having considered the motions, responses, replies, objections, the case file, and the applicable law, the court will accept and adopt the report and recommendation for substantially the reasons stated therein,” Judge Yeakel writes.

This is a clear setback for the RIAA labels and a win for Grande Communications. While the case is far from over, Grande’s management company Patriot is not liable for any copyright infringement, while Grande itself only has to defend itself against a contributory infringement claim. 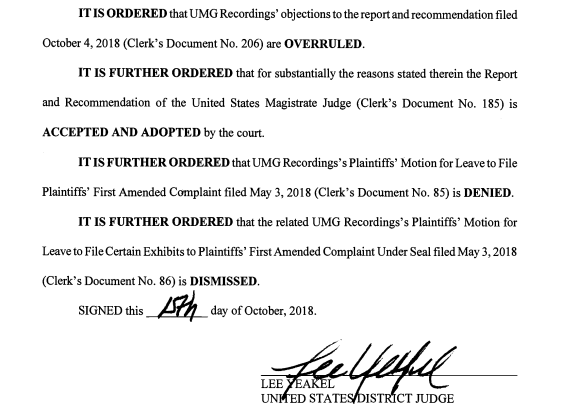 A copy of US District Court Judge Lee Yeakel’s order is available here (pdf). The RIAA’s earlier onjections can be found here (pdf).