Today, while doing research on the Pirate Party, I had cause to look at the Italian division’s website. Within just a few minutes I suspected that I’d been overdoing it lately – even with the invaluable help of Google translate, I had absolutely no idea what I was reading.

The site looked familiar enough, with plenty of instances of the Party’s famous pirate flag around and Pirate Party written across the top, but the stories on the site made little sense when viewed through the prism of the Pirate Party’s core values. It’s the Pirate Party, Jim, but not as we know it.

I quickly came to the incorrect conclusion that Google translate was messing with me when in fact the truth was even more strange – someone had pirated the Pirate Party.

The real Pirate Party – known locally as Partito Pirata (we’ll refer to them as this from now on to avoid yet more confusion) – have their online base located at partito-pirata.it.

The ‘imposters’, who appear to promote environmentalism, both animal and social rights but nothing remotely ‘pirate’, have set up camp at PirateParty.it. They have been passing themselves off using the Partito Pirata brand for some time.

“We were born in 2006, together with the Swedish movement,” said former Ministry of Finance employee and Partito Pirata founder Athos Gualazzi, clarifying Partito Pirata’s roots. “Those others just want to use our reputation as leverage.” 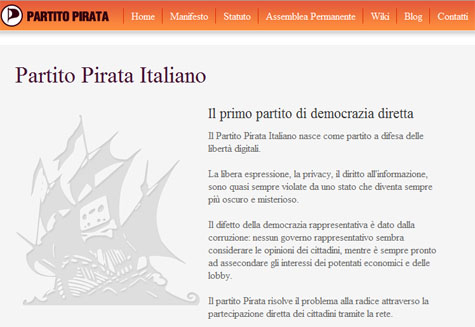 In an interview late last year, Marco Marsili, the 43-year old professor of communications and journalist behind PirateParty.it, turned things around somewhat.

“We are people with experience in politics, they are just a cultural association,” Marsili said of Partito Pirata.

“They live attached to the keyboard and if the current is pulled they die. In all these years nobody has ever heard of them and now they take advantage of the visibility obtained by us,” he concluded.

But now, following a complaint made by Partito Pirata, perhaps more than a little ironically the Court of Milan’s specialist intellectual property section has moved to defend the name, identity and ‘brand’ of the genuine Partito Pirata.

According to a source familiar with the case, the judge’s reasoning in ruling in favor of Partito Pirata was that the Pirate movement is defined worldwide as being critical of copyright and seeking its reform. The ‘fake’ Pirate Party do not so they are not even conforming to the identity they’re trying to ‘kidnap’.

In his ruling the judge ordered the ‘fake’ Pirate Party and Marco Marsili to cease using the name Partito Pirata, Pirateparty or Pirate Party, on- or offline. The use of the name in a domain name is also banned. The group is further forbidden to use the official Partito Pirata logo and has 15 days to comply or face fines of 500 euros per infraction and 200 euros per day for non-compliance.

But the strange story doesn’t end there. According to Partito Pirata founder Athos Gualazzi, the attack on his Party’s identity has sinister toots.

“From the very beginning there has been an attempt to distract from our political experience by people we believe to be paid by the SIAE and the majors,” said Gualazzi. SIAE are the Italian Authors and Publishers Association, an organization responsible for the protection of copyright in Italy.

As well as being the individual behind the ‘fake’ Pirate Party, interestingly Marco Marsili is also the president of the Confederation of Italian Music, a trade group representing record producers, publishers, authors and artists. According to his personal site, Marsili claims to have “signed major contacts” with, among others, SIAE.

Although some will find this attempt at ‘pirating’ the Pirate Party quite delicious, ‘pirated’ is almost certainly the wrong word here. This appears to have been an attempt at identity theft in order to mislead. Quite how deep the rabbit hole goes after that is a question for another day….