When the Swedish Pirate Party was founded in early 2006, the majority of the mainstream press was skeptical, with some simply laughing it away.

But they were wrong to dismiss this political movement right off the bat.

Following their victory at the local elections, the Swedish Pirate Party secured a seat at the European Parliament in 2009, with another one being added a year later. The success inspired people in other countries to form their own Pirate parties. In 2014, the Pirate Party kept one of these seats, thanks to German voters.

During the last European Election, just a few weeks ago, this number quadrupled to four, showing that the movement is certainly no fluke. While the Swedes were on the forefront in the early years, Germany and the Czech Republic now lead the way, with one and three MEPs respectively.

These Pirates in the European Parliament are not sitting idly by. During the last term, Julia Reda was at the forefront of many lawmaking discussions, particularly with regard to the new Copyright Directive. While Reda recently left Parliament, the new MEPs obviously have similar ambitions.

With 426 votes, Marcel Kolaja was elected with an absolute majority in the second voting round. He will serve as one of the fourteen Vice-Presidents tasked with replacing the President as chair of the plenary if needed, as well as a variety of other tasks. 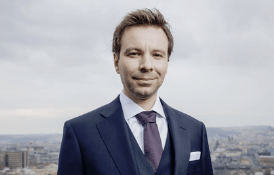 The 39-year-old Kolaja is a Czech software engineer and activist, who’s been active in the Pirate Party since the start of the decade.

In his new position, he aims to promote transparency and digitization in the European Parliament.

“My role of a Vice-President would be to make the European Parliament more open and transparent, to help ensure that the rules of the Parliament are applied equally to all Members and to work on improvements of the rules where they are currently lacking,” Kolaja says.

The newly elected Vice-President also hopes that this experience in information technology and digitization can be used to benefit the European Parliament.

“It is my hope that my expertise and insights in these fields will be a valuable contribution in the future Bureau’s discussions on improvement of the work in the European Parliament,” Kolaja adds.

In addition to the vice presidency, Marcel Kolaja will also become a member of the Internal Market and Consumer Protection Committee (IMCO) and a substitute member of the Culture and Education (CULT) Committee.

The three other Pirate Party MEPs were also assigned to various committees. Markéta Gregorová will join the International Trade (INTA) committee. Mikuláš Peksa will be a member of the Industry, Research and Energy Committee (ITRE), while Patrick Breyer joins the Legal Affairs (JURI) committee.

Needless to say, the Pirates have come a long way since the first raid on The Pirate Bay in 2006, when they were first propelled into the mainstream.