With millions of visitors per month, Uploaded is one of the largest file-hosting services on the Internet.

Like many of its ‘cloud hosting’ competitors, the service is also used to share copyright infringing material, which is a thorn in the side of various copyright holder groups.

In Germany this prompted music rights group GEMA, which represents roughly 70,000 artists, to address the matter in court.

This week the Regional Court of Munich ruled that Uploaded must take a more proactive stance when it comes to online piracy. In its current form the site can be held liable for the infringements of its users, which means that it faces damages.

According to the court order, Uploaded is not only obliged to remove infringing files when they are reported. It must also take additional measures, such as preventing the same files from being uploaded again.

This is similar to the “take-down and stay-down” principle copyright holder worldwide are lobbying for.

Overall, the court found that Uploaded’s business model is “risk-inducing” and “dangerous for copyright owners,” highlighting the anonymity of users and the referral program as factors that increase the service’s liability.

Like other file-hosting services, Uploaded allows users to generate revenue by referring new customers to the site. 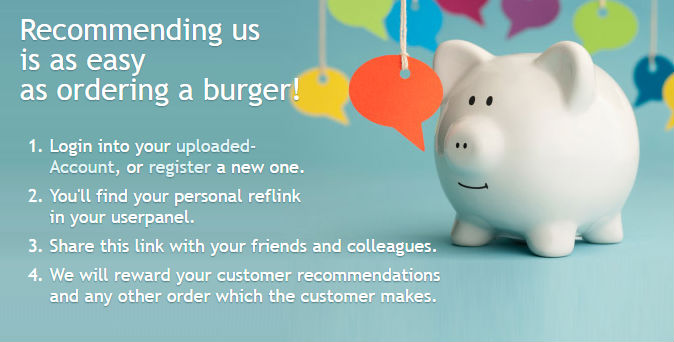 GEMA CEO Dr. Harald Heker is happy with the outcome and calls for a regulatory framework where site operators are held responsible for the piracy that occurs though their services.

“File-hosting services earn a lot of money though the exploitation of creative content. Copyright infringements are willingly accepted. This imbalance hurts our members and is something we can’t accept,” he says.

Uploaded’s parent company Cyando AG has yet to comment on the ruling.

This is not the first case Uploaded has lost in Germany, Rasch lawyer Mirko Brüß informs TorrentFreak. In April the company lost a similar case against the Association of American Publishers, which dealt with pirated e-books.

“What the judgments have in common is that, according to the court, Uploaded is not only obliged to take down content when they are notified of an infringement. They also have to take proactive measures to prevent the same work from being re-uploaded and made available for download again.”

While Uploaded can be held liable for damages, the court order is not yet legally binding and is likely to be appealed. In any case, a follow-up case is required to establish an exact damages amount.