Last week we showed how downloads, including content from popular sites such as The Pirate Bay, YTS, and RARBG, have increased in recent weeks.

While this upward trend is clearly visible in the global numbers, zooming in at the country level adds a more detailed perspective. That is exactly what we did over the past several days, resulting in some rather intriguing findings.

To begin, we take a look at Italy, which was the first European country to be severely impacted by COVID-19. Responding to the increasing threat, the local government implemented a lockdown on March 9th, instructing people to stay indoors.

Using data provided by iknowwhatyoudownload.com, we analyzed the number of Italian IP-addresses that were found sharing torrents from the start of the year, as well as the tracked number of downloads.

The graph below shows that both the number of downloads and the unique IP-addresses reached new highs on March 9, after which they continued to go up for a few days, to then stabilize. 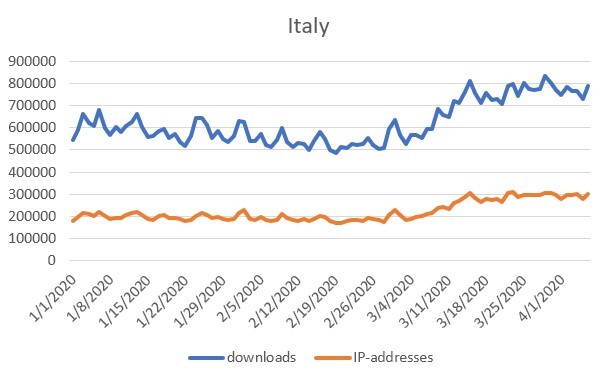 In Spain, there is a similar trend that started a few days later, again coinciding with the lockdown measures. The Spanish Government ordered its lockdown on March 14, with both the number of downloads and unique IP-addresses reaching new highs on that exact date.

Similar to the Italian situation, both numbers continued to go up for a while. A week after the lockdown started, reported downloads and IP-addresses were up by roughly a third. 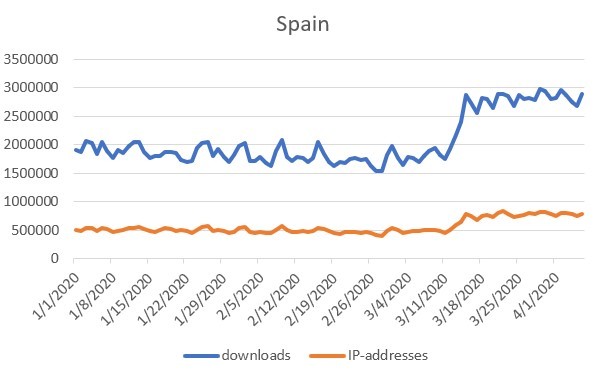 In France, the effect of the countrywide measures is also clearly visible. Again, both numbers reached a yearly high on the day the lockdown went into effect, growing even further in the following days. 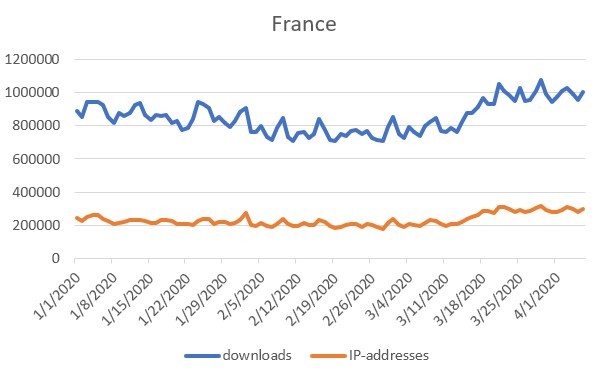 There is also an upward trend in the UK, as can be seen in the graph below. This effect is less pronounced than elsewhere, likely because people are still allowed to move relatively freely, which is a clear difference compared to the previously mentioned countries. 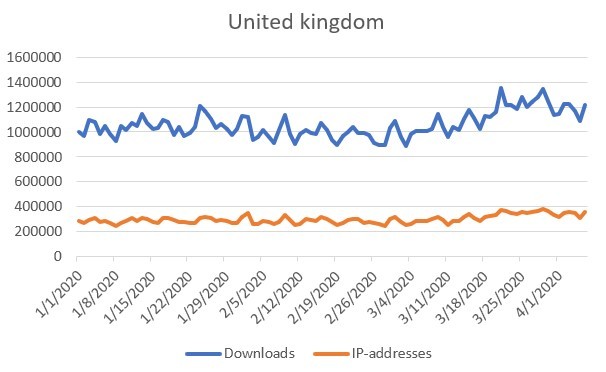 There are also some clear outliers in Europe. In the Netherlands, for example, there is no significant uptick in torrent downloads or IP-addresses. This, despite the intelligent-lockdown that’s been ordered locally.

There is not much change in Sweden either. That was more or less expected, however, as the Scandinavian country hasn’t taken any extreme measures to curb the spread of the virus. 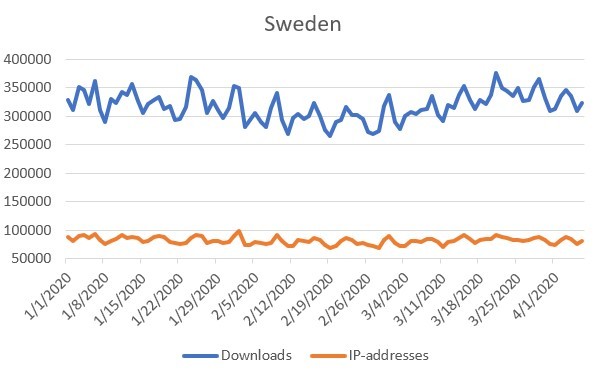 Moving over to the United States we see that there appears to be a small increase in downloads over the past few weeks, but nothing that really stands out. This is likely because most of the restrictive measures are limited to a few affected regions.

In South America, however, the effects are very clear in some countries. In Argentina, for example, which issued a lockdown on March 19, reported download numbers and IP-addresses shot up in the following days. 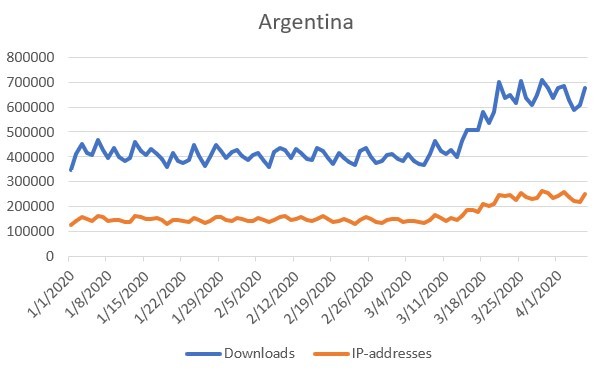 Moving around the world, we see similar boosts taking place. South Africa issued a three-week lockdown order starting on March 26, with torrent downloads and reported IP-addresses going up around the same time.

A similar spike was also evident in Saudi Arabia at the time more stringent measures were announced in some regions. On March 9 the first restrictions went into effect in Qatif, with measures following in Riyadh, Mecca, and Medina later in the month. 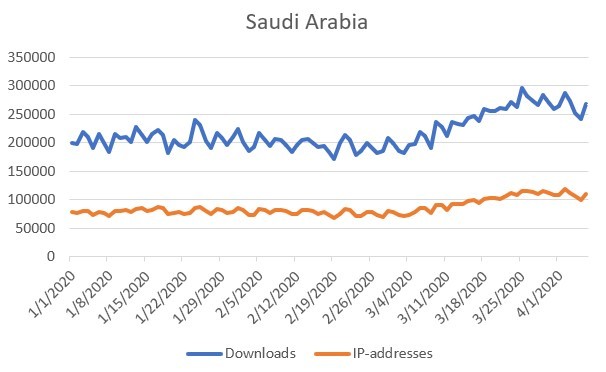 In Asia, the findings are not always as expected. While we previously reported on other data that showed that visits to file-sharing sites surged in China, the same pattern doesn’t appear in the downloads and IP-address data. This is also true for South Korea.

We did find a notable increase in some other Asian countries. In Singapore, for example, although the increase there had already started before the most far-reaching measures were made public. 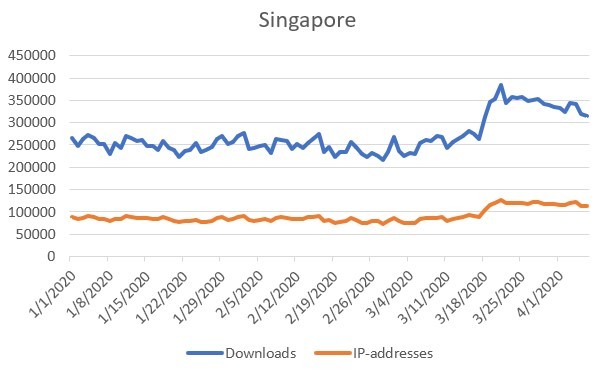 On the whole, however, it is striking to see how many of these charts follow the COVID-19 measures locally. The overall trend appears to be that the more strict the lockdown measures are, the greater effect they have on BitTorrent activity.

It will be interesting to see how these graphs develop over time. Will they eventually return to the pre-corona numbers or remain at a higher level?

The data used for the graphs presented here were provided by iknowwhatyoudownload.com. While this is not a full record of all BitTorrent traffic, it is certainly helpful to reveal trends within countries. For full transparency, we make the underlying data available here (January 1, 2020 – April 6, 2020). This also includes other countries.