When the Federation Against Copyright Theft and the Motion Picture Association teamed up in 2004 to create a new anti-piracy advert, neither could’ve believed it would still be getting press coverage close to two decades later.

Even today, the phrases “You Wouldn’t Steal a Car” and “Piracy. It’s a Crime” remain familiar to millions, largely because the ad’s original tone has spawned parody after hilarious parody.

Given that the original ad set the stage by coming across as a parody in itself, poking fun at it has never been difficult. Nevertheless, these little boosts have helped establish “You Wouldn’t Steal” as an enduring part of anti-piracy history that no other campaign has come close to matching. And the fun-poking isn’t over yet either.

In a move designed to deter people from meeting up illegally in the UK during the coronavirus pandemic, the UK government has released a public service announcement of its own, one that is a clear parody of “You Wouldn’t Steal”.

It was shared by the Home Office on Twitter, with the now-familiar message of “Stay Home. Protect The NHS. Save Lives.” The PSA consists of real video captured by police during raids on various locations recently including makeshift pubs, baby showers, and other illegal gatherings.

All gatherings are currently against the law.

Not generally known (at least publicly) for its sense of humor, FACT weighed in on Twitter, congratulating the Home Office on its video message and then suggesting that it might like to use one of FACT’s other videos as inspiration for its next campaign. 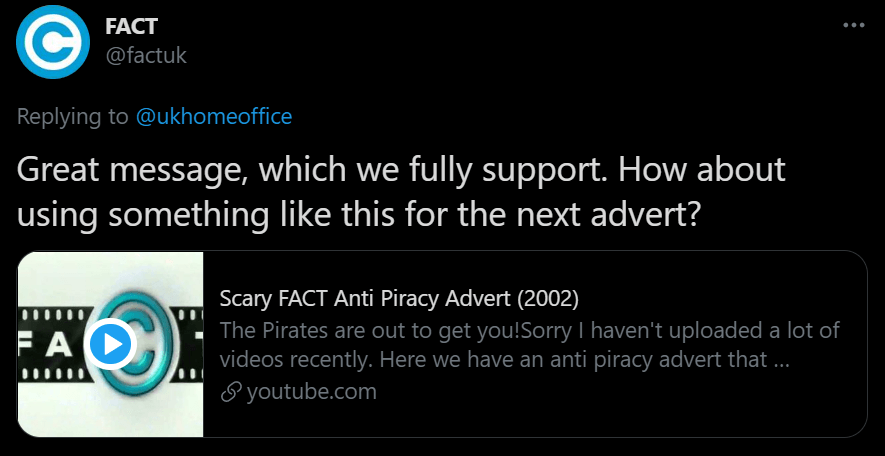 As seen below, this anti-piracy PSA suggested by FACT is even more ridiculous than “You Wouldn’t Steal..” and we have a sneaking suspicion that they know that. But the unintentional comedy was only just warming up.

As highlighted by users on Twitter, the anti-piracy PSA shared by FACT with the Home Office was uploaded to YouTube by a random user, not the anti-piracy group itself. That effectively makes it a pirated copy of a video that was originally designed to stop people from pirating – shared by the people who originally made it, to prevent people from pirating.

Of course, that can only lead to one conclusion and a final message to pirates for which there can be no adequate comeback….

YOU WOULDN'T STEAL YOUR OWN ADVERT