With 3.5 million Internet subscribers, Cox Communications is one of the larger ISPs in the US. Like all the other Internet providers, Cox receives numerous copyright related takedown requests from anti-piracy organizations.

However, it’s how they handle these requests that’s quite unique, and disturbing to say the least. Instead of sending their customer an email, notifying that they have received a DMCA takedown request on their behalf, Cox disables their Internet connection. Here is a quote from the warning page customers get to see when their Internet connection is cut off (screenshot below the article).

Under the DMCA, we have the responsibility to temporarily disable your Internet access, until such time as you take the necessary steps to remove the infringing files and to prevent further distribution of copyrighted material.

There are a couple of things wrong with this notification. First of all, and most importantly, the DMCA doesn’t oblige Cox to disable a customer’s Internet access at all. They have to notify their customer of the alleged infringement, but the measures they actually take are clearly out of proportion, and definitely not in the best interest of their customers.

Indeed, it has already led to a lot of frustration with Cox customers. One of them told TorrentFreak that he has been struggling for two days to regain his Internet access. The customer in question was instructed to call a phone number in order to resolve the issue, but it was impossible to get though for most of the day. When he finally got hold of someone via the regular customer service, he was simply told that he should call the same number he was given before.

After being on hold for more than an hour he eventually got through. The Cox customer told us what happened next: “He [Cox employee] said that he is going to allow me to have the Internet enabled for 1 hour while I ‘call my router company so they can walk me through securing my wireless network.’ If I don’t call back in the next hour, he will turn the Internet off again.”

First-time offenders will eventually get their Internet access reinstated, but not without being warned that they might lose it permanently if they receive two more takedown requests. “If it happens three times, I will be referred to their headquarters in Atlanta,” the Cox customer told us.

We contacted Cox’s customer support to verify this, and we were told that there is indeed a three strikes policy in place. When a Cox subscriber receives three takedown requests, their Internet access will be cut off entirely. Interestingly, this is the same policy that the European Parliament voted against last week, because it “restricts the rights and freedoms of Internet users.”

It turns out that Cox doesn’t need legislation to implement a three-strikes policy though. “Cox does in fact have a 3 strikes policy with regards to violations of our acceptable use policy for Internet service. If a customer’s service gets suspended 3 times for the same type of violation the customer risks having their Internet service terminated,” Cox’s customer support told TorrentFreak.

It is of course up to Cox how they handle alleged violations of their acceptable use policy. However, the problem lies in the fact that they act upon accusations made by the MPAA, RIAA and other anti-piracy organizations who employ evidence gathering methods that are shoddy, to say the least. In addition, there is still no law that requires a person to secure their wireless network and there are even routers that enable people to share their connection with outsiders.

We think that Cox clearly overstepped the mark here. Customers might not make as much noise as the lawyers of the entertainment industry, but eventually, they are the ones who bring in the money. Cox Communication currently uses the slogan “Your friend in the digital age.” Some friend… 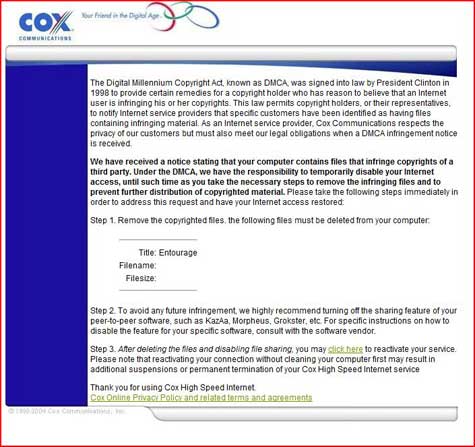